Hove Rugby Club hopes to fend off objections from more than a dozen neighbours to its plans for an extension and new balcony.

The first 15 objectors cited noise from events, increased traffic and bad language from players in letters and emails sent to Brighton and Hove City Council.

One anonymous online comment said: “The clubhouse and bar attract people who find it appropriate to misbehave, get drunk and upset their neighbours.

“The language used by the players, within earshot of watching supporters, is often obscene and inappropriate.

“Players arriving for matches urinate in the hedges. The rugby club is not an asset for the recreation ground.

“This application, if approved, will only encourage the current bad behaviour to go unchecked.”

Another redacted objection said: “We already have considerable noise from late-night events which often go on past midnight.

“The additional noise from parties and events would affect all those living around the recreation ground.

“The additional parking would be detrimental. Already at the weekends there is a huge amount of cars parked on verges and in the surrounding roads.”

In a report to councillors, the new extension and terrace is described as 100 metres from the nearest house.

And as the field is surrounded by trees any noise from the balcony would be “insignificant”, it said.

The club, based at Hove Recreation Ground, in Shirley Drive, wants to build more changing rooms and a meeting room at the back of its building, topped with a roof terrace. 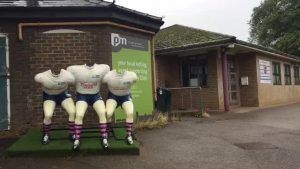 More toilets would be included in the scheme as well as storerooms.

While more traffic is expected, the council’s highways team did not object to the plans.

The report, to the council’s Planning Committee, recommends that councillors grant planning permission for the scheme.

It does, however, suggest that the balcony should be used only between 9am and 10pm.

The Planning Committee is due to decide whether to approve the scheme at a meeting at Hove Town Hall next Wednesday (15 August).

The meeting is due to start at 2pm and is open to the public.