A thief scaled railings and dropped 6ft into a basement lightwell on Brighton seafront from where he stole tools worth more than £1,000. 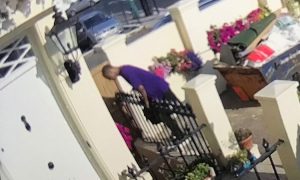 This afternoon Sussex Police published security camera pictures of the suspect in the case.

They want help from the public to identify the man who they described as agile and in his fifties or sixties.

The force said: “Can you help identify this thief who climbed over railings in central Brighton?

“At around 6.10pm on Thursday 26 July a man approached the property in Marine Parade and looked around before climbing over the railings and dropping down into the basement area 6ft below. 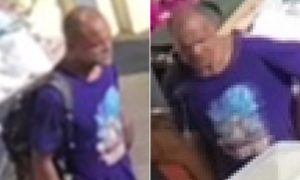 “The suspect has stolen over £1,000 worth of tools from the lightwell and then climbed back out and left.

“He is described as white, fifties to sixties, wearing a purple T-shirt with green and blue picture on the front, black trousers and black shoes.

“Anyone who recognises him is asked to get in touch online quoting serial 523 of 31/07.”