Cash card stolen in Hove burglary was used shortly after

A burglar stole a laptop, wallet and cash in a burglary in Hove – and shortly afterwards a bank card that was in the stolen wallet was used near by. 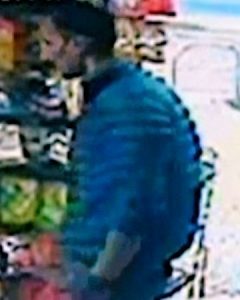 Sussex Police said: “Police have released this CCTV image of a man they would like to talk to in connection with a burglary in Hove.

“An intruder got into a flat in Glendor Road sometime between 5pm and 7pm on Wednesday 8 August and stole a laptop, a wallet containing two bank cards and £20 worth of jewellery from a bedroom.

“The bank card was used that evening in a convenience store in Boundary Road, Hove.

“The suspect is described as 6ft, thin, of Asian appearance with a large nose, short receding black hair and long sideburns.

“He is believed to have a pronounced stoop to his posture.

“If anyone recognises the man or has any information about the burglary, contact police online or ring 101 quoting 09 of 09/08.”