Police are trying to trace the owner of a bike which was locked to railings on Brighton seafront after a thief was thwarted while trying to steal it. 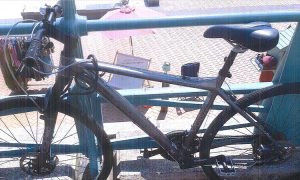 Sussex Police said: “Officers were driving along King’s Road on Saturday 7 July at 2pm when they noticed a man trying to cut the lock off a bicycle that was locked to the railings by Alfresco Café.

“A 25-year-old Brighton man was arrested on suspicion of attempted theft of a pedal cycle, criminal damage and going equipped for theft.

“He has been released under investigation.

“A police calling card was left on the silver Gary Fisher mountain bike so that the owner could get in touch with police but so far no one has come forward.”

PC Lucy Arnall said: “We still trying to trace the owner of the bike.

“If you are the owner or know the owner, please get in touch with us.”