Did someone fail a bench test outside Hove shop?

A new bench outside a supermarket in Hove has rapidly proved to be something of a talking point – and the butt of dozens of jokes and quips. 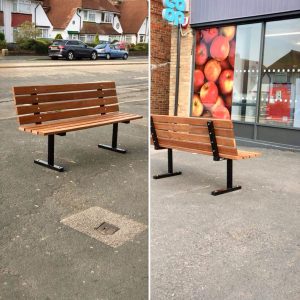 A few feet from the Co-op shop window in The Parade, in Hangleton Road, the bench faces the store from close quarters.

Dog walker Kelly Howells posted two photos of the newly installed bench this afternoon (Friday 31 August) and said: “They had 1 job. I had to double take when I saw this.”

Locals piled in on the Happenings in Hangleton Facebook page.

Melanie Grice said: “Think they went in the pub and got pissed before they put it in lol.”

David Rees said: “Possibly a better view than the parked cars – let’s see if Co-op put a tv with advertising loop in the window.”

Councillor Dawn Barnett, who represents Hangleton and Knoll ward on Brighton and Hove City Council, said: “It is quite a talking point just now.

“I cannot understand why it was placed back to front thought it must be April the 1st.”

The council said: “It does initially seem that the bench has been put in the wrong way round, so we’re trying to find out if there was a reason for it to be facing the shop.

“Once we’ve spoken to the people who fitted the bench, if necessary we will change the positioning of the bench.”