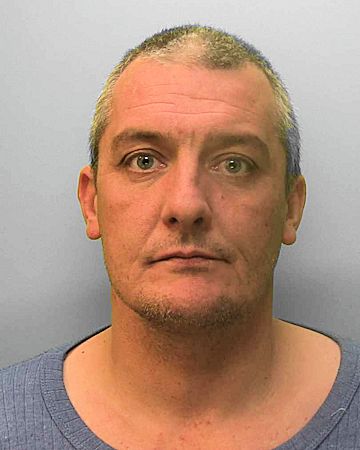 Police are looking for a Brighton man who has failed to appear at court over a vehicle theft charge, and is also wanted in connection with alleged aggravated vehicle taking and conspiracy to blackmail.

Stephen Lowe, 41, also known as Stephen Gumbrill, failed to appear at Brighton Magistrates Court on 29 May to answer a charge of theft of a car in Kings Road, Brighton on 5 April this year.

He is also wanted for an aggravated vehicle taking on 9 March 2017, when a car was stolen while parked overnight in Bristol Road, Brighton and then driven into a house in The Esplanade, Peacehaven, later that day. Nobody was in the address and substantial damage was caused to the front lounge. The car drove off.

Lowe is also wanted over an alleged conspiracy to blackmail an East Sussex man by demanding a quantity of cash between December 2016 and March 2017.

Authority has been given by the CPS for him to be charged with the alleged vehicle taking and blackmail offences when he is arrested.

Lowe, who is white, 5ft 11in, with receding brown/greying hair and a number of tattoos on his arms, is last known to have been living at an address in Brighton earlier this year, although he may also have travelled to southern Europe since.

Detective Constable Claire Linsell of the Eastbourne Investigations Team, said; “Anyone who has seen Lowe or has information on his whereabouts, is asked to contact us online or by calling 101, quoting Operation Bakerloo.

“Alternatively you can contact the independent charity Crimestoppers anonymously on 0800 555 111.

“But if you see him or know where he is now, do not approach him but contact us via 999.”