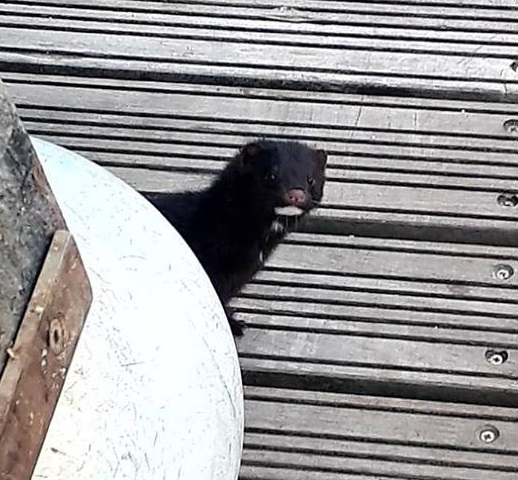 A mischevous mink has been spotted at the Marina this week – but although it’s charmed some of the fishermen there, others have warned not to be fooled by its cute appearance.

Fisherman Ted Gillam took this picture of the mink after spotting it there on Sunday, and posted it on Brighton People thinking it might be a lost ferret.

But other posters soon established it was a non-native American mink, which has helped bring the Sussex water vole population to the near-extinction.

And it’s possibly the same one, or a relative of one which chewed through power boats there ten years ago.

Ted said: “I was working on the boat and I just saw it walking along the quay. It was quite lively. One of the guys said it was in my boat on Sunday morning and it dipped in the water afterwards.

“I couldn’t understand how tame it seemed to be. It stood its ground and as I neared, it just trotted off. At first I thought someone had lost a ferret.

Charlotte Owen, wildcall officer at Sussex Wildlife Trust, said: “The American mink first became established here in the UK in the 1950s, when animals escaped or were released from fur farms.

“Mink are now fairly common and widespread throughout the UK and are regularly spotted in Sussex, which is bad news from a conservation perspective because mink are voracious predators and have a major impact on our native wildlife, particularly the water vole.

“Mink are one of the only predators that can follow water voles into their riverbank burrows, so there is no escape, and the pressure of mink predation on top of existing habitat degradation has driven the Sussex water vole population to the brink of extinction, with a loss of more than 90% in the past 30 years.

“Mink also prey on vulnerable bird species including the kingfisher, which also nests in bankside burrows. So while they may be cute and engaging, mink are not desirable residents and the humane control of this species is often an essential conservation tool.”