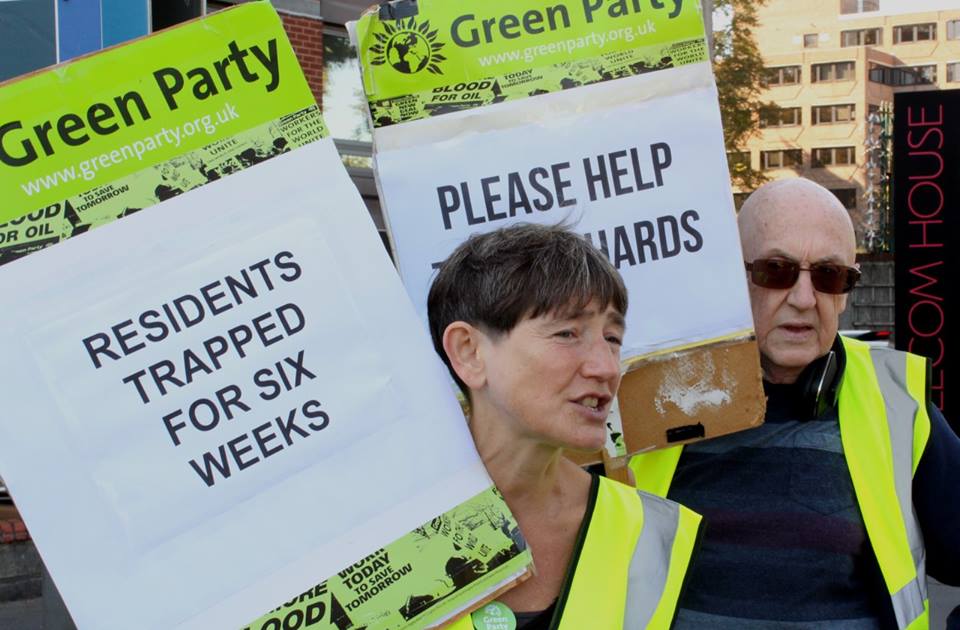 The protest at Hyde’s offices yesterday. Picture by Piera and Barry.

A protest was held outside Hyde Housing’s offices over a broken down lift which has left sheltered housing residents “trapped” for six weeks.

Hyde Housing Group are now installing an emergency stair lift after several visits by engineers have failed to solve the issue at The Orchards in Moulsecoomb Way.

Protesters say at least ten tenants at The Orchards are affected, and that carers have been told they cannot carry them down the stairs either. And they say they have now heard of similar issues at other sheltered housing complexes run by Hyde.

Mitchie Alexander, who organised the demo outside the offices in Preston Road yesterday afternoon, said: “We think this is outrageous, cruel and utterly dangerous that there are elderly people with mobility problems above the ground floor who are unable to leave their homes.

“Carers have been told not to carry wheelchairs or persons down the stairs due to health and safety issues. Not being able to go outside for such a long time can lead to further physical and mental health problems.

“Since this issue came to light this week, we have also discovered at least three other sheltered housing buildings in Brighton have the very same issue, a broken lift and trapped residents.

“We are a group of very concerned Brighton residents and we demand that Hyde Housing Group get the lifts working NOW so that their tenants can get some fresh air and are not in danger of being trapped in the case of a fire!”

Judith Page, Interim Director of Compliance at the Hyde Group said: “We ask our residents to accept our sincere apologies that we have not yet fixed this issue. It is turning out to be much more complicated than we would ordinarily expect.

“Engineers have visited The Orchards on numerous occasions to get to the bottom of the issue and unfortunately due to its complexity we cannot give a completion date at this time.

“However we do understand how frustrating this is for our residents and please be assured we are doing everything we can to solve the problem as soon as possible.

“As an interim measure we have ordered a stair lift to be installed as a matter of urgency to help with access while the problem with the lift is resolved. Our staff will be on hand during this difficult time to help in any way they can.”