Brighton’s musical charity fun run – the Run2Music – has teamed up with three local charities, the organisers have announced. 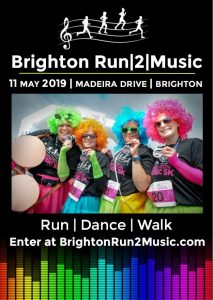 They said: “Brighton Run2Music, Brighton’s most colourful and entertaining running event for 2019, is delighted to announce that Martlets, Rockinghorse and the music charity Rhythmix have signed up as official charity partners for this year’s run.

“The event, which will take place on Saturday 11 May in Madeira Drive, is being organised by the team behind Brighton and Hove Triathlon, many of whom have worked on Olympic and Paralympic Games.”

Brighton Run2Music race director John Lunt said: “What makes this event so appealing is the three different distances – 5k, 10k and 21k – and all the entertainment we have on offer before and during the race.

“With dancers, cheerleaders, live DJs and musicians, this really is a fun, community event and ties in really well with our chosen partners, Rhythmix, Martlets and Rockinghorse.”

Rhythmix chief executive Mark Davyd said: “We are delighted to be partnering with Brighton Run2Music for this year’s event, which coincides with the 20th anniversary of Rhythmix.

“In the last 20 years we have supported thousands of people with music at some of the most challenging times in their lives – dealing with ill health, tackling dementia, facing mental health issues.”

Martlets’ director of income generation Sally Brighton said: “Martlets is delighted to be partnering with Brighton Run2Music in this exciting fundraising venture.

“Martlets is at the heart of Brighton and Hove and we hope this partnership will raise vital funds to help us provide life-changing hospice care for the local community.

“Being part of Brighton Run2Music combines for us everything we love about this vibrant city and we look forward to dancing, running and having fun to help people living with a terminal illness.”

Rockinghorse chief executive Ryan Heal said: “We are delighted to be involved in this year’s Brighton Run2Music event and are looking forward to attending this unique challenge in our city.

“We’ve already had some positive interest from our supporters who are keen to sign up to help us raise vital funds.”