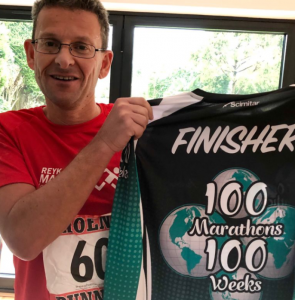 Each of Lyons’s marathons were the official distance of 26.2 miles in race conditions, which also included 10 marathons in 10 days in Gravesend last August.

He said: “This was the hardest event as not only was I running the same route every day but it was the only time when I thought my body would cave in – well, running 262 miles is quite a challenge.

Lyons marathon events took him to America, Spain, Austria, the Faroe Islands, the Netherlands, Cuba, Madeira and all corners of the UK.

Asked Lyons how he found time to run so many marathons and a business, he said: “I am fortunate that I have two directors who are sporty themselves so they get it – not that they would run a marathon though!”

As for Lyons, now that he has run 200 marathons will he stop running? “Of course not. I will have a little rest then in mid April I will be running the Brighton Marathon.

“This will be its 10th year and for those of us who have run all 10, we are going to be spoilt with an additional achievers medal I understand – so I must have that in my collection.”

Mr Lyons has another challenge – running for election. He is standing as a candidate for Brighton and Hove City Council in Westbourne ward in Hove for the Conservatives on Thursday 2 May.