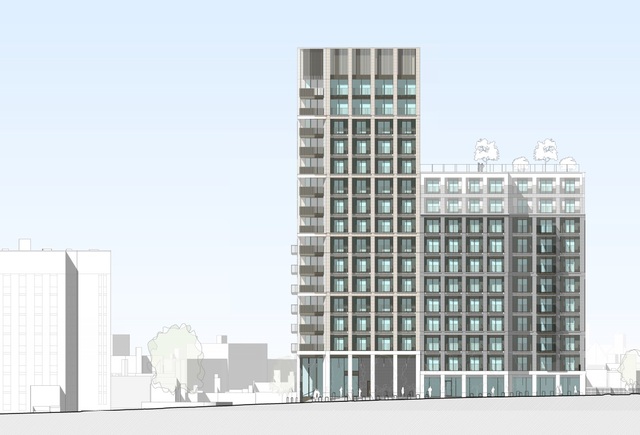 An 18-storey tower block of rented homes and offices has been recommended for approval next week.

The block planned for the Longley Industrial Estate, currently home to Master Tiles and Dice Saloon, at the corner of Elder Place and New England Street, Brighton.

The development by Legal and General is for a staggered block ranging from three to 18 storeys includes 201 flats, 3,270sqm of office space and 308sqm of commercial or shopping space.

Seventy letters were sent to Brighton and Hove City Council against the development.

Concern ranges from the building being too high to the loss of hard-to-find commercial space to make way for luxury flats.

One anonymous commenter wrote on the council’s website: “The proposed height of the new development is ridiculous and will tower over all adjoining properties by as much as twice the current existing height.

“This will be, in the words of Prince Charles, a monstrous carbuncle, blighting the entire area and be visible for miles around across most of the city.”

Another commenter whose name was redacted, said they see the lines of traffic heading across Preston Circus every day, and the development would cause problems.

They said: “The size of this new development will be the tipping point. Housing almost a thousand people it will swell the traffic issue.

“I know there will be no parking for the development but you will still have people being dropped off and picked up during rush hour, as well as deliveries.

“There will be no going back as I can see no way of improving the road network in this sensitive area.”

A restrictive covenant requiring all the flats to be rented for at least 15 years is recommended.

Ten per cent or 21 affordable flats on the site would be rented at 75 per cent of the market rate.

This would include six one-bedroom, ten two-bedroom and five three-bedroomed flats.

The Planning Committee discusses the application when it meets in public from 1.30pm on Wednesday 20 March at Hove Town Hall.