Councillors are being urged to reject plans for a block of 88 more student flats near the Vogue Gyratory in Brighton. 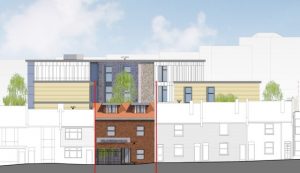 The block, in Hollingdean Road, would be up to six storeys high and would be built behind homes on the busy road, fronted by a gatehouse designed to match the existing buildings.

But a report to members of Brighton and Hove City Council said that the height, position, form and scaling of the proposed building would make it “overly dominant”.

Planning officers said that people living on the lower floors would be overshadowed, with a limited outlook, as the building would be close to the boundary.

They also raised concerns about parking, saying that the developer, CKC Properties Limited, had not carried out a survey into parking pressures.

Four people have objected to the scheme and 46 letters of support have been received by the council from students using pre-printed sheets.

These said that the scheme would add value to an untidy and rotting site, would save family homes from being converted into shared houses, would boost the local economy and was in the right location for Brighton University where it would provide students with a fit-for-purpose place to live.

One objection on the council website, with name and address redacted, said: “This development will not in any way reduce the pressure on existing HMOs (houses in multiple occupation) in this part of the city which charge a far lower rent.

“Thus the development will not release accommodation for the bulk of undergraduate students or the permanent residents of the city.”

Another wrote: “I’m very sorry to object to this application but as far as I can see there is no mention if any provision for additional internet infrastructure to support a further 88 student apartments in this area.

“Due to the distance from the nearest exchange and the lack of cable/fibre optic in this area, the internet service here is already at a virtual standstill.”

The council’s Planning Committee is expected to decide the application at a meeting at Hove Town Hall next Wednesday (20 March). The meeting is due to start at 1.30pm and is open to the public.