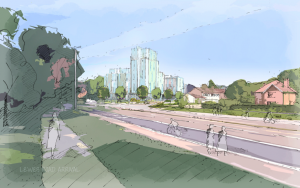 There are currently 52 comments supporting plans to build a complex of five to seven-storey buildings at One Moulsecoomb Way, replacing the KSD Environmental Services site and St Francis of Assisi Church.

Developer McLaren proposes 378 student bedrooms as well as offices and community space on the site on the corner of Lewes Road.

The company built the Vogue Studios and Stoneworks further south along Lewes Road.

Heavy traffic, road safety and smells coming from the waste transfer site are among the themes in comments supporting the scheme on Brighton and Hove City Council’s website.

Comments are published anonymously on the planning site and written or emailed responses are redacted.

One anonymous commenter said: “I’m fed up with the queuing traffic and congestion caused by the entrance to this waste facility being so close to the main Lewes Road.

“Year on year the problem gets worse. Get rid of this hideous operation and move it somewhere more suitable.

Another said: “The current operation at this site is noisy, smelly, unsightly and potentially hazardous for our children who have to cross the road to access their school.

“I can see nothing but a benefit for the local community by the replacement for this eyesore with a modern facility to house students.

“Brighton has many commendable educational faculties and is a core fiscal contribution to the city’s economy.”

In January, Moulsecoomb and Bevendean ward councillor Daniel Yates presented a 1,250-signature petition calling for a new site for KSD Environmental due to concerns about safety and traffic.

In his former capacity as chair of the council’s Policy, Resources and Growth Committee, Councillor Yates responded to the petition in March saying that the council could not force a company to move. 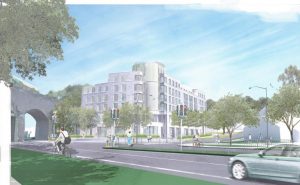 He asked for officers to monitor the site and reminded the petitioners that the area was part of the McLaren proposal.

There is also hope that the new scheme will free up family homes currently converted into student houses in multiple occupation (HMOs).

A comment on the council website said: “Imagine attending university and staying in a nice safe building rather than some shanty rundown townhouse that’s been converted for a private landlord to make a quick buck.

“This can only encourage the people that do use the university and stay here to gain qualifications and remain in a city that they would have enjoyed studying in. “

Another said: “This application has come to my attention due to the amount of students on the council estate.

“I believe by creating purpose-built blocks of student accommodation this will naturally reduce the amount of students currently renting properties on the council estate.

“This in turn will make the housing available to families who should be living in these types of properties.”

An anonymous comment against the scheme dismisses the idea that students will leave HMOs.

The comment said: “Bus services are already overcrowded and will be unable to take more passengers.

“Students living in Moulsecoomb HMOs will not relocate to purpose-built accommodation because of rental cost.”

Moulsecoomb Primary School has objected to the plans, saying that the tall building would overlook its playground.

The school’s objection said: ” Given the concentration of numbers of study bedrooms, the school is concerned that the development has the potential to exacerbate disorder and disturbance in the immediate vicinity of the school.

“The school has already noticed an increase in anti-social behaviour as a result of the Moulsecoomb estate becoming home to a large number of students.

“Examples of this include frequent instances of broken glass bottles on the routes to and from the school, with a noticeable increase coinciding with the beginning of the academic year for university students.”

A public meeting is taking place on Wednesday 5 June for people to discuss their reaction to the application.

Plans for One Moulsecoomb way can be seen by visiting planningapps.brighton-hove.gov.uk and searching for BH2019/01272.