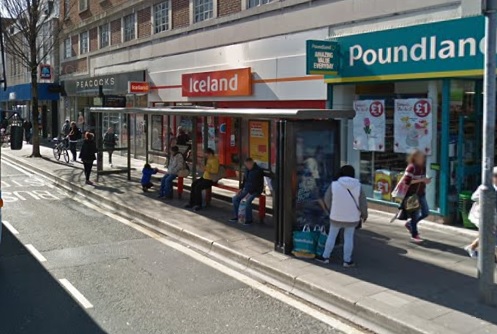 A woman who was shouted at by a stranger who accused her of spying on him for the council over several months was left victimised and scared, a court heard this week.

Roy Morter randomly started shouting at Helen Riddell in 2017 when was getting the bus to work at the London Road bus stop outside Iceland, as she did every day.

Morter, 74, who she had never met before, tried to engage her in conversation, shouting “alright darling” at her, prompting her to move away.

But the next time he spotted her there, things became more sinister, and soon Morter was harassing her whenever he saw her there, several times a week.

Miss Riddell was often surrounded by children and parents from the school she works with, so felt even more embarrassed and helpless.

She told the court from behind a screen: “He would shout at me asking if I was still at it then.

“There were occasions where he would come up next to me, put his head over my shoulder where I was looking at my phone.

“Every time he got on the bus when I did.

“On one occasion he sat down next to me and was asking me if I was still at it again very aggressively.

“On another occasion he got on the bus and sat by me at the back and put his bags in the aisle so I had to climb over them so I could get away from him.

“He would bang on the bus shelter window really hard, screaming at me and just trying to engage with me in any way possible.”

She said she would encounter him every Monday and Wednesday until she called the police in April 2018, at which point he switched to other days of the week.

This was also when the shouting stopped, but he would then stare directly into her eyes and then spit at her feet from a short distance away, she said.

Finally, on 6 November last year, she decided she couldn’t take it any more and when he stared at her outside the pound shop, she went up to him and told him that if he spat at her again, she would call the police.

He came after her, shouting, and so she called 999. While she was on the phone to the operator, Morter boarded a bus, and Miss Riddell was told to pass her phone to the driver so they wouldn’t drive away.

The police turned up soon afterwards and arrested Morter.

She said: “He made me feel so embarrassed at the bus stop where it always took place.

“I was surrounded by parents and children who go to the school I work with who are witnessing these things and I have to stand silent and pretend they’re not going on and bring it to their attention.

“I felt victimised and scared.”

As she gave evidence, Morter interrupted to demand she tell the court what her address is.

At one point, he also interrupted to say: “I was challenging her surveillance of me.”

The trial had already been adjourned from 16 April after Morter, of Upper Hollingdean Road, sacked his solicitor.

This meant that nobody was able to cross examine Miss Riddell on his behalf, as he was not allowed to address her.

At yesterday’s rescheduled hearing, he represented himself and told district judge Tessa Szagun he had sacked four solicitors since his arrest last November because they were all “singing from the same song sheet”.

He also told her he wanted to explain a conspiracy between the police, the council and NHS doctors at Mill View Hospital going back 27 years.

The trial was not able to conclude yesterday because Morter did not accept the written police statements, which meant officers would have to give their evidence in person.

A provisional date to continue the trial was scheduled for 4 July at Brighton Magistrates Court.