A Sussex University student was named one of the country’s rising stars at an awards ceremony in Parliament last night (Thursday 18 July).

Hlanganiso Matangaidze, who has just completed his second year studying economics and finance, was recognised for setting up a business to bring renewable energy to people in southern Africa.

Mr Matangaidze won a Rising Star award as one of the top ten outstanding black African and Caribbean students in the country.

The students were chosen from a shortlist of high achievers for their determination, depth of achievement, breadth of talent, initiative and leadership.

The awards ceremony in the House of Commons was sponsored by David Lammy MP.

Mr Matangaidze, who has just completed his second year at the Falmer campus, came to Britain with his family from Zimbabwe at the age of five.

By the age of 14 he had set up his first business as an in-house personal tutor, working with his classmates, teaching three or four pupils a week.

Shortly afterwards he and his friends started selling wristbands with personalised emergency contact details on them to Duke of Edinburgh expedition students to wear in case they became lost.

As a fresher at Sussex, where he is studying economics and finance, Mr Matangaidze carried out research into the frequent power cuts or outages affecting many people in Zimbabwe.

The figures contribute significantly to the 1.2 billion people globally who have no reliable source of electricity.

To try to tackle the problem, Mr Matangaidze founded RED, with the aim of building low-cost, vertical wind turbines and distributing them across rural Zimbabwe and Malawi.

He entered the Sussex Innovation Centre’s annual enterprise competition, StartUp Sussex, and RED became one of 10 finalists chosen by judges and fellow students from the 39 teams in the competition.

His idea was the only first-year student project to be picked to receive a £500 Santander Entrepreneurship Award and an eight-week intensive mentoring course at the Sussex Innovation Centre. 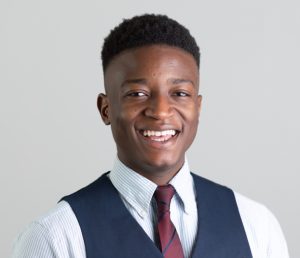 Mr Matangaidze went door to door to sign up his first customers in Zimbabwe, with funding from a British angel investor, Damien Tanner.

The pilot scheme produced wind turbines made from recycled parts such as discarded washing machine motors.

But it struggled to produce enough electricity during initial testing because of a lack of high, constant winds.

They registered the RED Group as a private limited company in May last year when the idea came second out of 500 initiatives in the Sussex Innovation Centre Social Impact prize.

It was recognised for its exceptional contribution to sustainable development.

In the next phase Mr Matangaidze aims to distribute a reliable solar energy source to 2,400 people.

RED users pay about 36p a day under a credit finance system until they own the system themselves, bypassing altogether the outages of Zimbabwe’s blackout-prone national grid.

So far, 22-year-old Mr Matangaidze and his team have received £8,000 of funding for RED and have reached the final round in the Young Start Up Talent competition.

They have also made it into the top five of the Lead 2030 Challenge, which supports youth-led innovation for the United Nations’ Sustainable Development Goals.

Terrific night of music at the Green Door Store