The mayor of Brighton and Hove is to drop the tradition of prayers being said before council meetings, replacing them with poems read by children.

Councillor Alex Phillips has invited two pupils from Patcham High School to read poetry as she prepares to open a meeting of Brighton and Hove City Council for the first time.

Councillor Phillips, 34, the youngest ever mayor of Brighton and Hove, said that in her first two months in the post she had focused on engaging with women, children and young people.

And she wanted to carry this over into the meetings that she chaired.

The Green councillor, who is also a newly elected Member of the European Parliament (MEP) and mother of one, said: “As a young mayor, I see the importance in opening the world of local politics up for our school children to experience.

“It’s vital that there is some sort of moment’s attunement ahead of full council meetings because they are quite long and they can become very heated.

“However, I felt that giving young people the opportunity to showcase their talents in the council chamber, while simultaneously focusing councillors’ minds on the decisions and interactions they are about to make, was the best way to go about it.

Her plan is for all future meetings to start with young people reading poems of their choice or ones that they have written themselves.

Full council meetings are held every six to eight weeks after a cycle of committee meetings.

They provide an opportunity to ratify decisions made by committees as well as agree policies and ask questions of the administration.

Prayers are not part of the formal council meeting itself but take place shortly beforehand. It is up to each mayor whether they choose to have prayers and Councillor Phillips’s decision to have poetry readings instead has caused a stir.

Conservative councillor Tony Janio said that he had asked the council’s head of democratic services whether it was in the “mayor’s protocols” to stop prayers “on an atheist whim”.

He said: “Learnt morals and traditions – we ignore these at our peril.

“I am not sure the mayor has ever attended prayers but she should not be allowed to prevent us from continuing with our traditions.”

In January 2012 the High Court ruled that councils lacked legal power to hold prayers as part of a meeting.

But it was legal before the start of a meeting provided councillors were not summoned to attend. 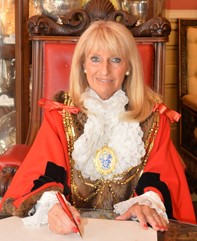 She said: “Personally, as mayor of the city, I felt it important to follow the traditions that had been established over very many years by appointing a chaplain and offering prayers before meetings of full council.

“For me and many others, this sets the tone for the meeting to follow.

“Every past mayor has dealt with this in their own way by offering prayers from many different religions but prayers have always been said and, out of respect, I have always attended, though some councillors chose not to.”

Previous mayors from the Green Party, Bill Randall and Pete West, opted for multi-faith prayers, with a representative from a different denomination offering prayers ahead of but outside each meeting.

Councillor Alex Phillips asked the Rev Anthea Ballam to be her chaplain and this was recorded, but not announced, at the inauguration of the mayor in May.

Ms Ballam also served as chaplain to the mayor in 2016-17 when another Green councillor, Pete West, served as mayor. She is an interfaith minister, writer and celebrant and chairs the Interfaith Contact Group of Brighton and Hove.

Independent councillor Bridget Fishleigh was taken aback at the flurry of emails about the subject ahead of her first full council meeting.

She said: “Our city has too many issues that urgently need tackling – like the looming Valley Gardens disaster, homelessness, schools, graffiti, etc – to spend any time on small procedural issues like this.”

The full council meeting is due to take place at Hove Town Hall from 4.30pm on Thursday 25 July. It is scheduled to be preceded by a special meeting at 3pm to thank councillors who completed their terms in May. Both meetings are expected to be held in public.