A Brighton businessman and landowner has applied for planning permission to build an extra home on a site formerly used as horse stables. 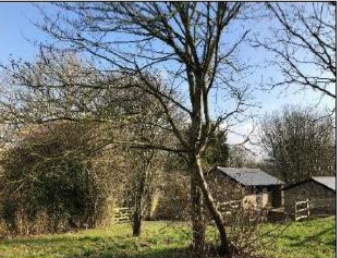 Peter McDonnell, 51, of Ovingdean Road, in Ovingdean, already has permission to build three houses on the land, behind Wanderdown Road.

The businessman, a director of KSD and part-owner of Whitehawk Football Club, plans eight parking spaces for cars and 12 for bicycles – as well as a wider junction with Ovingdean Road.

Neighbours are concerned that the changes will increase the risk of accidents on the busy road which is used by, among others, children from nearby Longhill School.

The design of the four homes would incorporate flint at ground floor level, with timber clad upper floors and green roofs.

The scheme is likely to have “an adverse effect on protected or priority species and on designated sites, important habitats or other biodiversity features”, according to the planning application form.

The site has 89 trees or groups, with 51 trees and nine areas covered by tree preservation orders (TPOs).

It includes a number of sycamore trees, with some ash among hawthorn and the occasional elder and a few cypresses.

Under the plans, eight trees and two groups would be removed but a specialist report suggested that only one of those trees would be regarded as desirable to retain.

More than a dozen of the trees are in a poor condition, with some of the sycamore in particular having suffered damage caused by grey squirrels.

The planning agent and architects ECE said: “The trees recommended for removal … are not significant specimens … and their loss is considered to not detract from the TPO area.

“Additional planting will also be provided to the north west of the site which will adequately screen the proposal from wider views.”

One neighbour said in an anonymous objection posted on the council’s website: “(The) development is like a carbuncle on beautiful wooded area.”

The neighbour said that the scheme would compromise the rural character of the area and photographs, submitted in support of the planning application, did not adequately show how views would be affected.

Another anonymous neighbour said: “This development will almost certainly increase the traffic levels, with more cars and delivery vehicles polluting the area.

“No consideration has been given to the proposed access to this development, currently from a blind spot at the top of a hill on the existing road though Ovingdean.”

The neighbour, echoing a previous objector’s comment about traffic and children from Longhill School, asked whether the scheme was an “accident waiting to happen”?

A decision on whether the scheme is granted planning permission is expected by the middle of next month.

To see the details or comment, visit the planning applications page on the Brighton and Hove City Council website and search for BH2019/02175.