Next time you’re in Ship Street, look above the FatFace shop and you’ll see a commemorative blue plaque dedicated to Clementina Black. 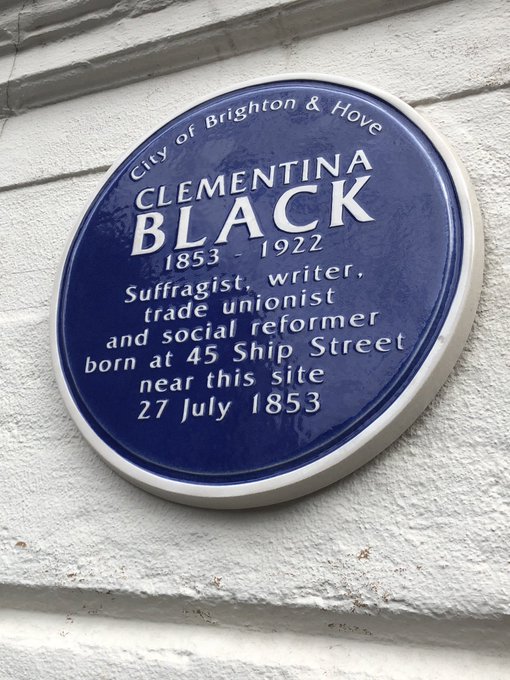 Clementina was a suffragist, writer, trade unionist and social reformer. She was born at 45 Ship Street in 1853.

Clementina was determined to improve working conditions for women and went to the TUC as a delegate, becoming the first woman to publicly call for equal pay for equal work.

The suffragists and suffragettes were never just about getting the vote. The vote was the means to the end – to get better pay and working conditions, to be able to put food on the table, a roof over your family’s head and a safety net for when there was no work.

And where the state did not provide, the suffragists and suffragettes did – offering child care, setting up co-operatives and communal kitchens because their battle was not just a women’s issue – it was a class issue.

They did whatever it took to enable and empower women to join together and participate in the campaign to secure equal rights.

Clementina and women like her became role models for other women – they showed women that another world was possible.

I want to thank Brighton and Hove Women’s History Group for organising the plaque and unveiling, and the local trades unions for responding so positively to my requests for funding.

It felt very special to speak at the event, as indeed did Caroline Lucas MP, and to see Frances O’Grady, the general secretary of the Trades Union Congress (TUC) unveil the plaque as trade unionists from across the UK gathered in Brighton.

I’m very proud that we have taken another step to permanently mark the contribution made by women in our city and in particular to a woman trade unionist.

The recognition we give to Clementina Black is not just about her but stands as a symbol to the hundreds of women who were part of this movement and whose names we will never know because they have been lost to history.

Councillor Nancy Platts is the Labour leader of Brighton and Hove City Council.

Assurances over Valley Gardens have been given by the council