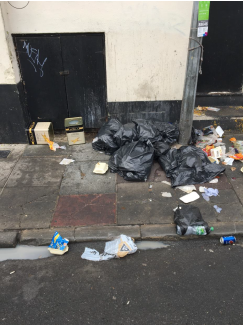 Two Brighton takeaways have been fined more than £1,000 each for dumping their waste on the street and in resident’s bins.

Brighton Magistrates fined Ahmet Yumusak, owner of the AA Charcoal Grill, 41 Lewes Rd, a total of £1,330 after rubbish from his kebab shop was fly-tipped on St Martin’s Street.

In a separate case, magistrates also fined Ysen Ni, owner of the Almoosh Arabic Restaurant, 8 Western Road, £1,055 when waste for thrown into a resident’s on street bin.

AlMoosh has also this week been given a one star rating after hygiene inspectors rated it poor for both hygiene and structural compliance and said they had little confidence in its management.

Both takeaways were taken to court by Brighton and Hove City Council as, by law, companies must have special arrangements in place for disposing of their waste and cannot use ordinary bins or leave rubbish on the street.

Cllr Anne Pissaridou, chair of the council’s environment, transport and sustainability committee, said: “Businesses like these who break the law cost council taxpayers many thousands of pounds each year and therefore deserve hefty fines.

“They are both well used restaurants in busy parts of the city, so I question why they would want to take the chance of their reputations being damaged by dumping their waste illegally. We all love our local food businesses, but they must act responsibly.”

Neither Mr Yamusak or Mr Ni, nor company representatives, attended court so magistrates carried out sentencing in their absence. They were both found guilty under section 33A of the Environmental Protection Act 1990.

AA Charcoal Grill, whose company name is AA Brighton Ltd, but is based in North London, received a fine of £800 with £450 costs and an £80 victim surcharge after committing the crime in May.

The AlMoosh Arabic Restaurant, run by AlMoosh Snack Ltd, also of 8 Western Road, was handed a fine of £550 with £450 costs and a £55 victim surcharge for the offence, which happened in April.

Cllr Pissaridou added: “These fines show we will eventually catch up with companies and people who fly-tip. Our environmental enforcement officers are out and will take the necessary action to prosecute offenders.”