Steps have been agreed to try to reduce some of the hundreds of spare places in primary schools across Brighton and Hove.

The move disappointed parents at two of the schools after petitions failed to persuade councillors to have a rethink about their approach.

But councillors voted – some of them reluctantly – to reduce the “published admission number” and, as a result, the number of classes, also known as “forms of entry” at four schools.

They fear that keeping the number of reception classes unchanged may put pressure on funding and could lead to more job cuts.

At Hove Junior School, in Holland Road, the published admission number (PAN) will drop from 128 to 90 pupils. And at Hove Infant School, in Connaught Road, the PAN will go down from 90 to 60.

More controversially, the PAN will be reduced from 90 to 60 children, meaning a drop from three to two reception classes at both Hangleton Primary School and Mile Oak Primary School.

The decision followed a six-week consultation which ended last week. Brighton and Hove City Council said that 82 people responded, with 85 per cent opposed to the changes.

A report to the council’s Children, Young People and Skills Committee said: “Neither Hangleton Primary School or Mile Oak Primary School support the proposals and considered they were misrepresented about their level of acceptance to the proposals being consulted upon in the first instance.”

And parents from Mile Oak presented the committee with a petition containing 550 signatures.

Peter Jones, a statistician and parent of a pupil at Hangleton Primary School, told the committee that he had “no confidence” in the council’s figures.

The figures suggest that Brighton and Hove will have almost 350 surplus places in September, rising to more than 700 by September 2023 as birth rates fall.

The council uses a statistical “model” counting the number of babies registered with local family doctors and estimates how many children will live in new housing schemes.

Mr Jones said: “We are a stone’s throw from Goldstone Primary School and treated differently based on an arbitrary planning line.”

He said that the model did not take into account internal migration and people moving in and out of the area.

He added: “West Blatchington has significantly lower numbers. It has 24 pupils in reception and is running a deficit. Why are our numbers reduced rather than theirs?” 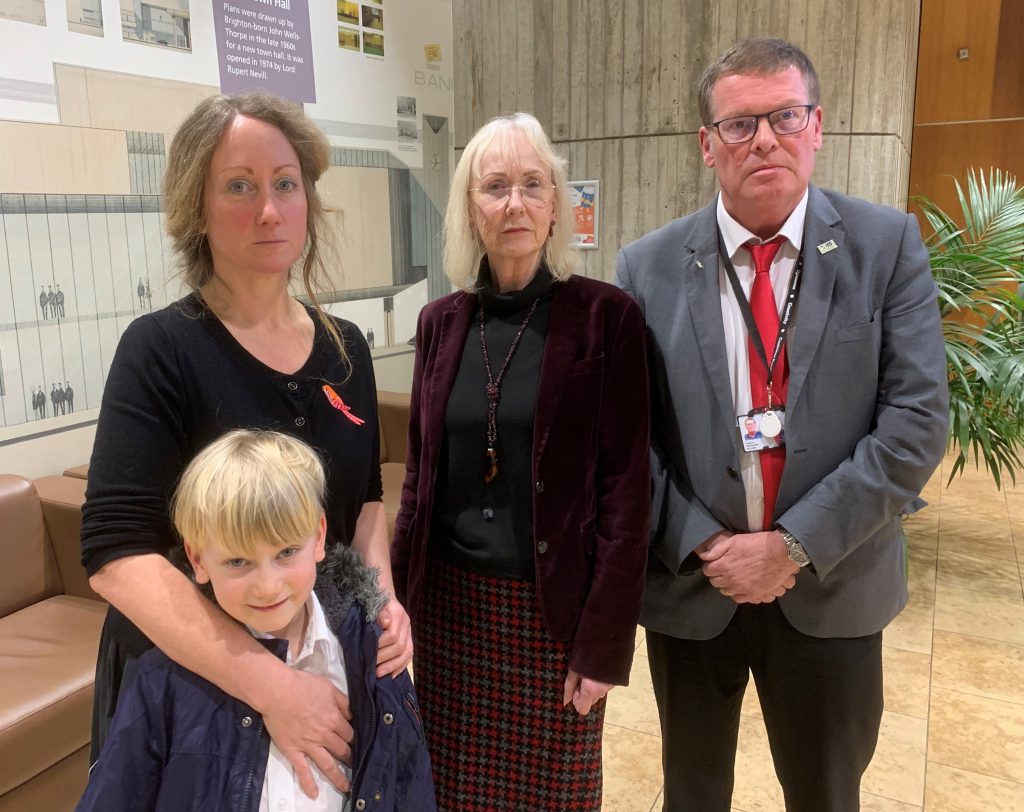 She said: “We are at risk of losing the best teachers – the ambitious teachers – teachers who are committed to our children.

“The risk factors from my point of view as parent is that our children need to be taught by committed highly invested teachers who are securing year on year improvements in Year 6 data.

“They are ensuring better outcomes for our young people after six years of staffing turbulence. Redundancies and increased use of supply teachers will put this at significant risk.”

Mile Oak mum Sarah Pain told the committee that parents should have an option of different school sizes and Portslade already had a number of small schools.

“As a large school it means children have a bigger friendship group to choose from with a bigger range of children to develop. This is harder to sustain as a two-form entry school.”

She said that a new housing scheme of 125 more houses, many of them affordable family homes, is in the process of being built.

Richard Barker, the council’s head of schools organisation, said that the council’s estimates had proved to be 97 per cent accurate in previous years when it came to predicting school numbers.

Labour councillor John Allcock, who chairs the committee, said that councillors from all parties were working together to prevent the need for schools to close by taking a “sensible long-term strategic view” while making difficult decisions in the short term.

In response to the petitions he praised the leadership and teaching at both school.

Councillor Allcock said: “I do want to emphasise that proposing reduced admissions numbers is in no way reflective of the quality of education at either of these schools.

“We would expect the same high-quality education to continue if the schools become two form entry.”

Fellow Labour councillor Les Hamilton, a retired teacher who represents South Portslade, said that there was little alternative but to reduce the school intake due to the number of surplus spaces.

He said: “It is with regret we have no real option other than to go along with what the cross-party working group discussed.

“We have got to take some places out of our primary schools.”

Conservative councillor Vanessa Brown also supported the reduction in class numbers but felt that she had been put “in a quandary” as she was reluctant to go against the head teachers’ and governors’ views.

Councillor Brown said: “These two schools have been operating temporarily on two-form entry and the numbers of children are still decreasing.

“Although we are reluctant to go against the heads and governors, we do feel we should support the recommendations.”