Golfers to stay at Hollingbury 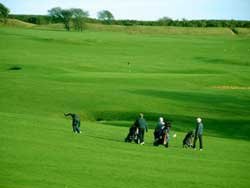 Golf will continue at one of two Brighton courses where the game was under threat after a charity submitted a bid to expand what was on offer at the site.

The identity of the charity that wants to run Hollingbury has not yet been revealed while sensitive commercial negotiations take place with Brighton and Hove City Council.

But if the talks succeed, the charity will take an initial three-year lease with the potential to turn it into a 25-year lease.

The principle of the deal was approved by the council’s Policy and Resources Committee this evening (Thursday 23 January) after a heated debate between councillors.

The charity would take on the course for up to three years rent-free while it worked with a golf course architect to obtain planning permission to change the existing layout and put in a driving range.

It would also want to extend and “enhance” the clubhouse to create a space for sport, health, mindfulness and education, including a holistic health centre, health and fitness studios and consultation rooms.

Public access would continue, with dog walkers asked to ensure that their pets were under control and potentially on leads.

He said: “What the preferred bidder is suggesting is the future of the golf course to become multi-purpose, eco-friendly, well-designed open land for more people to enjoy.

“I propose to put together a group who will sit regularly as a consulting voice with the bidder. All interested parties will be represented.

“The important issue for all parties (is that) the club will stay open while the necessary surveys are carried out.”

Green and Conservative councillors criticised the short timeframe for the decision-making process and the lack of public consultation.

Green group convenor Phélim Mac Cafferty said that they had less than 24 hours to process 112 pages of detailed information.

The public papers were released on Tuesday (21 January).

Green councillors called for more talks with the unnamed charity after the initial three years, with the option of a break clause, before handing over public land for 25 years.

The Greens said that the lease should come back to the Policy and Resources Committee after three years, along with annual reports on the environment to the Tourism, Equalities, Communities and Culture Committee.

The Greens also called for the creation of a Downland Policy Review Panel.

Councillor Mac Cafferty said: “We ask the city community to an assembly to engage with everyone about the future. On the other hand we’re offering a 25-year lease without a council-led consultation taking place.

“We need to make sure the proposal comes back to the council.”

Fellow Green councillor Marianna Ebel said that not enough time had been given and the financial detail felt “rushed”.

She said “This is three years rent-free and it puts us in a poor position when negotiating with the bidder.

“They will have a break clause. They can walk away.”

The Conservatives had some sympathy with the Green position as Tory leader Steve Bell agreed the process was too rushed and Joe Miller agreed that the process had not been started early enough.

Councillor Miller, a former golfer, said that he supported the charity’s plans for the Hollingbury course.

He said: “There are a number of benefits. I appreciate we are in a climate crisis. The landscaping is beneficial – and the driving range as we do not have this in Brighton.

“We have in West Hove but I used to drive to Burgess Hill so there are benefits to having it closer.”

But the Conservatives voted with Labour in favour of an initial three-year deal for the Hollingbury course followed by a 25-year lease.

As well as the future of Hollingbury, the Policy and Resources Committee also agreed to the rewilding of Waterhall Golf Course by a community interest company, whose details were also currently confidential.

Waterhall would act as a wildlife corridor and remain open to walkers, with an education centre proposed in the fourth year of the rewilding process. It would have a classroom to host between 1,000 and 3,000 children and adults a year.

Councillor Robins said that the process was not as simple as just letting the land go.

He said: “I have learnt so much and listened to the concerns over what we do and don’t do.

“You don’t just let nature take over. You have to manage the land within an inch of its life.

“This chalk downland will take time and effort and it takes money. There is someone willing to put put time and money into it.”

Waterhall club president Bud Evans asked when the land was gifted to the council in the 1920s was it conditional for golf.

Council leader Nancy Platts said that the council had taken legal advice and the deeds said that the site should be kept as “open space in perpetuity”.

Campaigners from Extinction Rebellion (XR) were outside Hove Town Hall to support the rewilding process.

Paul Wiseman, who is both a golfer and Extinction Rebellion member, told the committee that there were 9,000 people in the city who cared deeply enough about the environment and the future of the two clubs to sign petitions.

Mr Wiseman said that the two sites should not be mothballed, adding: “This will lead to a costly dereliction of the golf club infrastructure, degradation of the already-threatened features of ecological value and will contribute little or nothing to climate action.

“Please be clear, XR Brighton are not in any way opposed to golf continuing on the site.

“We believe that some reconfiguration of the golf course could allow it to continue functioning while addressing the climate and biodiversity emergency and while better serving the needs of the local community.”

The number of season tocket holders at Hollingbury Park has gone up from 271 in 2018 to 325 last year while the number at Waterhall fell from 94 to 88 in the past year.

A total of 15 bids were received, with three pledging to retain golf at Hollingbury Park and one for the sport at both clubs.

The council is encouraging discussions between the current leaseholder and MyTime Active over the transfer of eight staff at Hollingbury.

Three staff at Waterhall face redundancy but will be kept informed of vacancies within the council.