Graffiti, litter and anti-social behaviour blight Brighton and Hove – but it doesn’t have to be this way

If you talk to any long-standing resident of Brighton and Hove, the chances are they will mention the deteriorating state of the place.

They will comment on worsening graffiti, litter and various blights such as alcoholism, drug-taking and other forms of anti-social behaviour.

Most can be witnessed on a walk around the city centre – and increasingly in the outer suburbs.

Examples of this anti-social behaviour have featured prominently in reports on the Brighton and Hove News website in recent months.

They include the anti-social behaviour in Old Steine Gardens that is still causing such distress to neighbouring residents.

With such problems, you would think that the council would be using every tool at its disposal to tackle anti-social behaviour and enforce our local bylaws.

But shockingly, recent figures obtained by the Conservative group show that it isn’t.

The council employs a team of field officers. Their job description includes enforcement and inspection across different council services – such addressing anti-social behaviour and targeting hotspots.

There is meant to be a team of eight field officers working in the city – a manager and seven staff.

However, at the recent council meeting in August, in response to a question asked of the Greens by Conservative councillor Nick Lewry, it was confirmed that a third of the field officer positions were vacant, with 2.5 of the seven full-time equivalent (FTE) positions left unfilled.

And while the Conservative group was assured that these positions would be filled as soon as possible, one month on the council advised us that the situation has worsened.

Now there are three FTE field officer posts currently unfilled – and these positions are not expected to be filled until October at the earliest.

It is an underutilisation of a precious resource.

The impact on residents

It is important to remember that field officers are a service paid for by residents.

Their budget comes from two sources: the General Revenue Fund (which includes council tax receipts) and the Housing Revenue Account (funded by tenants’ rents and leaseholders’ contributions). So in fact many residents contribute twice to this service.

It indicates that anti-social behaviour and its impact on neighbourhoods was left as an afterthought by the last administration and hasn’t been swiftly addressed by the Greens.

Until the council properly uses all the resources it has at its disposal to tackle anti-social behaviour, including field officers, then four-day “clean up blitzes”, no matter how great, will make only a temporary dent in the problem and a few headlines. 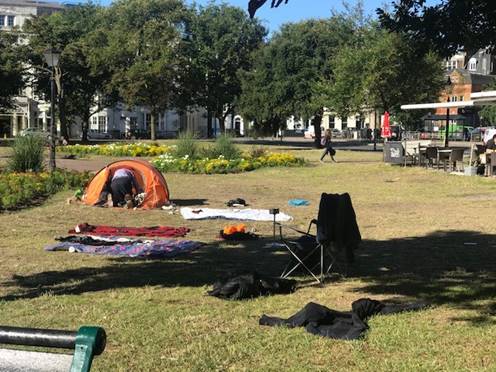 One of the tents in the Old Steine Gardens

As often is the case with this council, we need to see better management of the resources we already have available – and better service delivery on behalf of residents.

A fully staffed, properly organised and fully co-ordinated field officer team could be contributing to co-ordinating the response against anti-social behaviour in the city.

So when residents remark that the state of the city contrasts starkly with how Brighton and Hove used to be, they are right – but it doesn’t have to be that way.

Councillor Steve Bell is leader of the Conservative group on Brighton and Hove City Council.