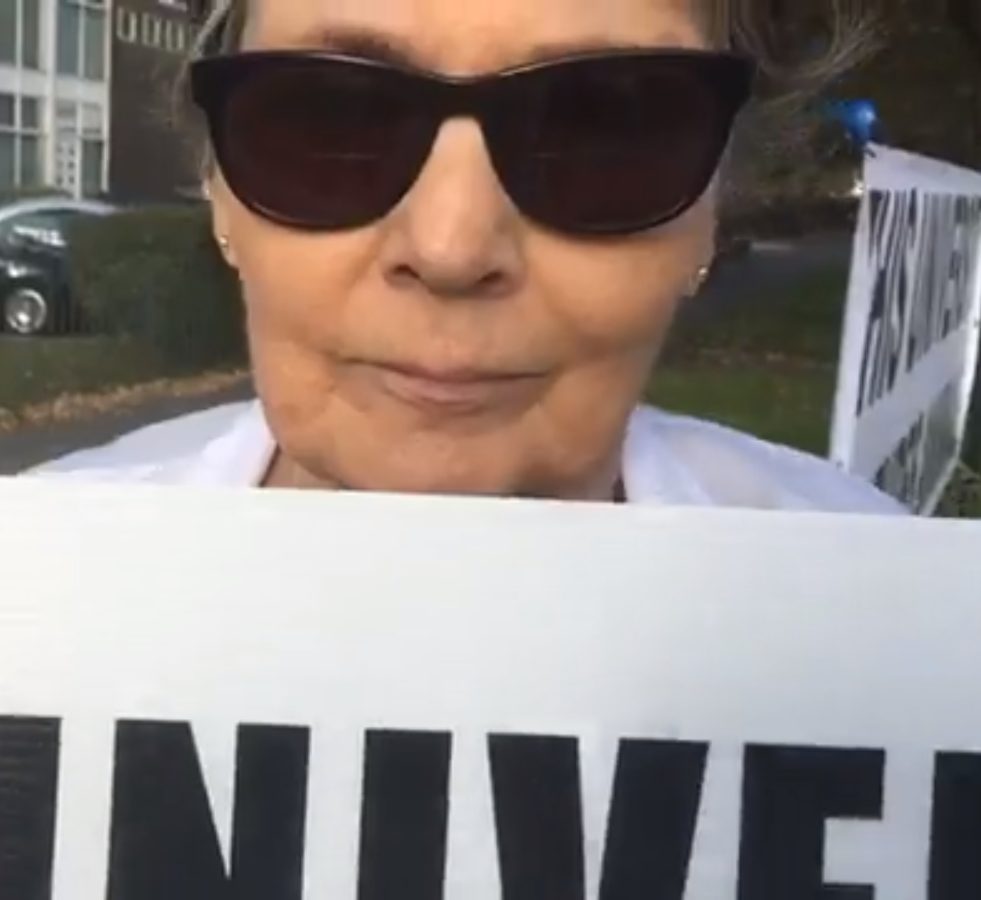 Sarah Whitehead protesting outside the University of Brighton on 7 November

An infamous animal rights fanatic who was jailed for six years for her part in a terrorist-style campaign against an animal testing lab is now targeting the University of Brighton.

Sarah Whitehead, 63, was in court last week for hurling abuse and threats at punters and staff of Hove dog track.

Police have been monitoring her activities for several months after people living near the track complained about the weekly megaphone tirades.

Horsham Magistrates Court has banned her from going near the stadium during race times ahead of full criminal behaviour order application in March.

But Brighton and Hove News understands police are now monitoring her activities at the university, where she has started protesting against animal testing.

So far, the protests have only involved megaphones and placards.

As a member of Stop Huntingdon Animal Cruelty (Shac), Whitehead and a gang of activists targeted suppliers of Cambridge-based Huntingdon Life Sciences.

They called them and threatened retaliation if they didn’t stop supplying. If that didn’t work, they sent letters to their neighbours falsely claiming they were paedophiles.

They posted realistic hoax bombs and daubed slogans such as puppy killer, murderer or scum on homes and cars.

Whitehead, who now lives in Uckfield, also recruited new members to the group and was known as ‘Mumsy’ by the young vegan activists and was said to have “corrupted” them by the judge who sentenced her.

As well six years in prison, she was given an Asbo to run for ten years from her release preventing her from protesting against animal experimentation.

However, she successfully applied to have this amended in July last year, and is now only prevented from protesting against Huntingdon Life Sciences.

Prosecutor Daniel Sawyer told Horsham Magistrates Court last week that her activities in Brighton and Hove were raised by police when they objected to the asbo being varied.

He said: “There was concern that she would start protesting at the University of Brighton with educational stalls.

He added that although the judge agreed to vary that condition, he told her that she was sailing close to the wind when it came to Hove Dog Track.

The asbo has about two years left to run.

However, in a general police statement about animal testing it says: “The university only supports the use of animals in research programmes of the highest quality, where their use is justified on scientific, ethical and legal grounds, and where there are no alternative approaches available.

“The university is fully committed to the principles of reduction, refinement and replacement known as the 3Rs: refining procedures; reducing the numbers of animal used; and replacing animals with other experimental methods wherever possible.

“Among the non-animal techniques developed at the University of Brighton are computer simulation, tissue and cell culture techniques and non-invasive imaging techniques.

“The university believes that a high standard of animal welfare is essential to support quality research and is therefore committed to the maintenance of the highest possible standards of laboratory animal housing and promoting a strong culture of care.

“All personal details regarding staff undertaking or supporting the use of animal in research at the University will be kept confidential for reasons of security and personal safety.”