Plans for new housing estate go back before councillors

Plans for a new housing estate on a greenfield site in Ovingdean are to go back before councillors.

The Meadow Vale site has been sold and the new developer Brookworth Homes has asked Brighton and Hove City Council for permission to make changes so that the scheme is deliverable.

The site is on land that slopes down from Falmer Road in the east towards The Vale in the west.

Brookworth said that its revised plans would smooth out the bends in the spine road through the new estate.

This would make it easier for the refuse and recycling lorries to collect rubbish from the 45 homes planned for the nine-acre site.

A number of the houses would be smaller, most of them with three bedrooms, and the number of affordable homes would still be 18 – or 40 per cent.

The scheme was approved by a planning inspector after the council turned down the plans submitted by the previous owner Lightwood Strategic.

Councillor Mears said: “It is clear that the approved layout would have been undeliverable under the outline planning permission granted to the original application and now needs changes to the approved scheme to make it work.

“All the changes are to enable a deliverable development, which was not in the outline planning permission granted.

“With the new changes, I would ask the Planning Committee to ensure no harm comes to the ecology and biodiversity of the site, which is in a semi-rural location, close to two nature reserves.”

Councillor Mears also said that the homes could be “bland red brick boxes” when the original application indicate designs that blended in with nearby flint properties. 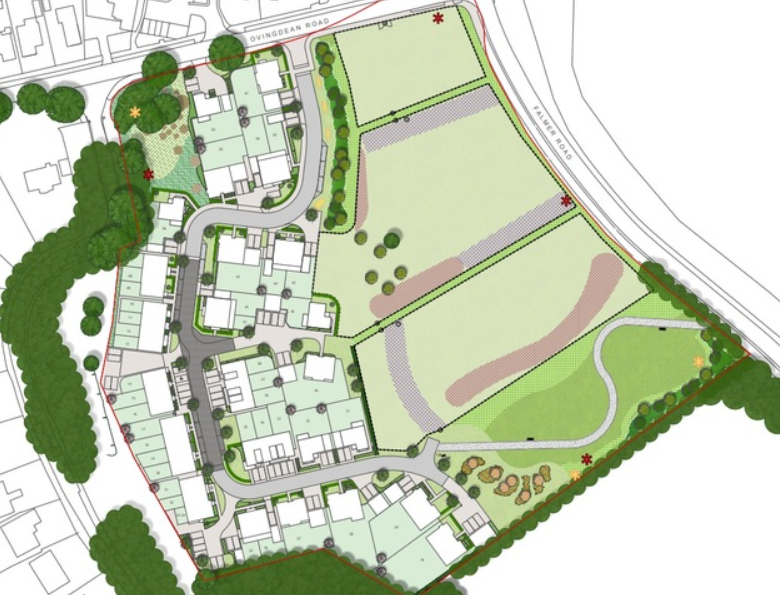 The new layout for Meadow Vale proposed by Brookworth Homes

Lightwood Strategic faced opposition to its plans for several years, having initially said that it wanted to put up 112 homes on Meadow Vale.

It submitted plans for 85 homes but the council turned down the proposal. It also rejected the current scheme but the decision was overturned on appeal.

The latest scheme attracted just three objections from neighbours and one from Councillor Mears.

The council’s Planning Committee is due to decide whether the plans can be amended next Wednesday (10 March). The virtual meeting, which starts at 2pm, is scheduled to be webcast on the council website.