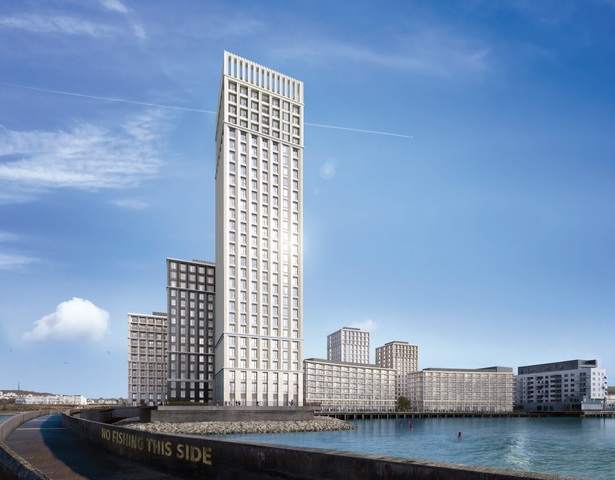 The scheme being appealed today

The owners of Brighton Marina will press ahead with plans for a 40-storey tower if their appeal against refusal of a 28-storey one fails, a hearing was told today.

A planning enquiry was held today into the Brighton Marina Company’s plans to build 1,000 flats in nine blocks, including one of 28 storeys, on land reclaimed from the western side of the marina.

The plans have automatically gone to appeal because Brighton and Hove City Council failed to decide them within statutory time limits.

However, officers said they should have been refused and councillors on the city’s planning committee agreed. 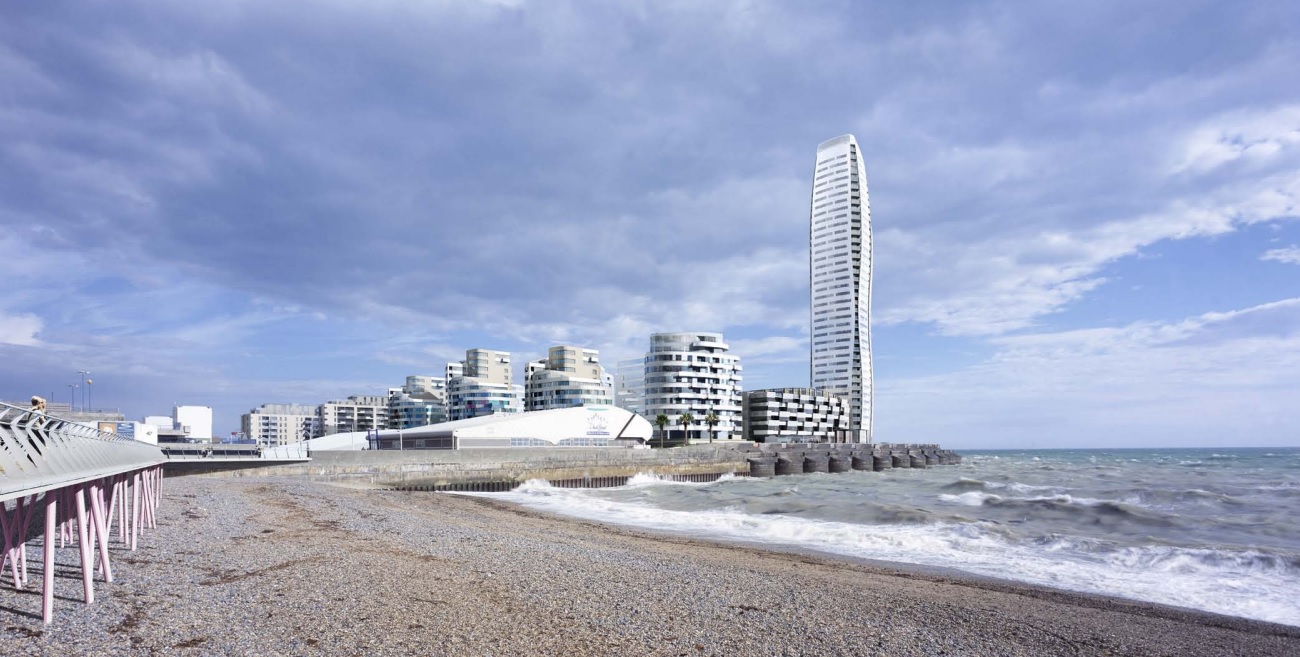 The original Brighton Marina plans approved in 2006, including a 40-storey tower

In 2006, a previous scheme for 853 flats in 11 buildings ranging from six to 40 storeys was approved, part of which has already been built.

However, he argued that the new scheme would link the marina and the rest of the city in a sympathetic and exciting way.

He said: “The city has a dense urban form, with strong horizontals punctuated by vertical elements such as the i360 or Sussex Heights.

“This scheme has strong horizontals, for example the crescent, and verticals in the form of the 28 storey tower.

“It would be fluid, address the sea and read well with the main city, complementing many of the ideas and features while sitting apart.”

He added: “The whole idea of the marina has something heroic about it and the scheme would complement that in the same exciting and streamlined way that Brighton has done over the last few centuries.”

Appearing for the city council, Anjoli Foster said the council was usually positive about large developments, and rarely found itself as the appellant in large planning enquiries like this.

And she said the fact the developer has confirmed it would now be going ahead with the rest of the original scheme if the new one was refused meant arguments about meeting housing demand were less pressing.

She said the latest scheme had significantly increased not just the number of homes, but also the footprint, resulting in an unacceptable quality of both building design and public realm.

She said: “It would cause unacceptable harm to the surrounding townscape.”

Planning inspector Paul Griffiths said he would be concentrating on four areas. The first is the effect on the character and appearance of the area, including heritage assets and the South Downs National Park.

The second is the provision of affordable housing, the third outside space and finally issues around daylight and sunlight both within the flats and outside spaces.

This afternoon, the city council’s principal planning officer Fraser McQuade gave evidence on the council’s assessment of the development’s impact on the local area.

He said: “I think that the experience of walking through the lanes [between the blocks to the western promenade], the spacing between the blocks combined with the height of those buildings would be quite oppressive.

“The experience of the buildings would be a negative one.

“I considered the massing through the site contributed to a low quality of design.”

He also said the close proximity of the buildings interrupted sea views both from the marina and the cliffs.