Work to start on resurfacing A259 seafront road next week

Work is due to start on resurfacing the A259 seafront road next Tuesday (6 April) and to last for three weeks.

Brighton and Hove City Council said: “Work will begin on Tuesday 6 April to resurface part of the A259 King’s Road in time for what we’re expecting to be a busy summer for the city.

“The work is taking place between the Grand hotel and Medina Villas and will be mainly carried out on the westbound carriageway, with some limited work on the eastbound side.

“The resurfacing, which is expected to take approximately three weeks, will be carried out on parts of all three vehicle lanes and the temporary cycle lane.

“While work will be conducted close to the Brighton Centre, no interruption with be caused to the vaccination centre as work close to the centre will take place at night.

“There is currently no planned closure of the road during these works affecting access to the centre.

“There will be no works during the Easter weekend.”

The council said that the work was necessary because “over time the highway suffers from wear and tear due to usage and weathering”.

The council said: “The seafront was identified as failing and inserted into a programme of works for replacement.

“These works are part of long-term maintenance for the highway along the seafront, to make the highway good quality and provide a better service to the public.

“The council has a statutory duty to keep the highway safe.

“Road resurfacing cannot take place in cold conditions so this is the earliest it can happen.

“We are taking the opportunity to carry out the works while traffic volumes are still lower than normal and while hotels are still closed.

“Any delay to another time will run the risk that the carriageway will fail completely and result in either a full closure or more disruption as it will not have been planned.” 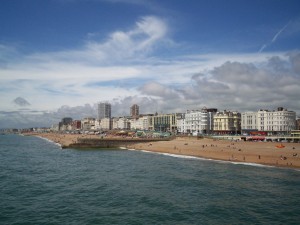 The council said that from Tuesday, work would take place on four consecutive nights, starting at the junction of Cannon Place and finishing at Western Street.

It said: “The works will start at 8pm and will require a full eastbound closure until 7am although we expect work to finish at approximately 4am.

“Westbound traffic will be moved on to the north side of the road and all side road traffic will have to turn right when exiting them.

“The temporary cycle lane will also be closed during the overnight works. Westbound cyclists will be able to use the cycle lane on the upper promenade during these hours.

“Everything will be done to minimise noise levels while the work is being carried out.”

In the week beginning Monday 12 April, the council said, work is due to be carried out in the daytime to avoid disturbing what is mainly a residential stretch of the seafront.

The council added: “Temporary traffic signals will be used and there will be some disruption and delays while the works progress.

“However, both carriageways will remain open. The works will be completed by the end of the week.

“There will be a further two nights of works on the westbound carriageway from Waterloo Street to Montpelier Road.”