A post office boss wants to add two floors to a neighbouring building by the Whitehawk Road roundabout, in Brighton, and link the two premises.

The aim would be to create four modern flats instead of two outdated ones, retaining the ground floor for commercial use.

Vijeyaratnam Thivakaran, who runs the post office in Whitehawk Road, wants to demolish the first floor of the building on the corner of Bristol Gardens before raising the height.

Brighton and Hove City Council has received eight objections and one letter of support for the proposals which are due to go before the Planning Committee next Wednesday (7 April).

The plans said that the proposed flat roof at the back of the building would not be used as a terrace by any future residents of the flats.

Mr Thivakaran said: “The proposals will provide a series of spacious apartments suitable for occupation by individuals and/or couples.”

He said that the architectural style would minimise the effect of the scheme on existing residents in Rugby Place and improve the appearance of the corner site.

Neighbours complained that they faced a loss of light, overlooking and more parking problems in the area.

One neighbour, whose name was redacted on the council website, said: “It will affect my views and amount of light coming into my property and therefore have a detrimental effect on the value. My flat will be exposed and overlooked.

“The parking in the area is already a nightmare and the last thing we need is more cars parked on our road, not to mention more traffic pollution.”

Another anonymous neighbour said: “Just because adjacent building at the rear of this development has a dormer window in their attic is a lame reason to suggest that four-story is acceptable and in keeping with the neighbourhood. It so obviously dwarfs the surrounding buildings.

“Not only is it too big, it will block light to my house and garden. Why can’t it be three-storey high like every other property?” 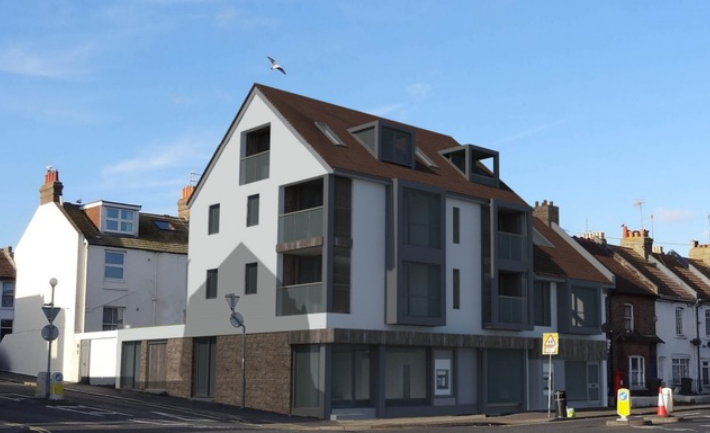 A visualisation of the flats planned for the Whitehawk Road roundabout, in Brighton, at the corner of Bristol Gardens

The anonymous supporter said: “It’s an update and improvement on what is currently built.

“I find the design aesthetically pleasing. The new construction will have improved insulation and building practices and provide quality housing to the area.”

A report to councillors recommends that planning permission be granted at a virtual meeting next week.

The Planning Committee meeting is due to start at 2pm on Wednesday (7 April) and the meeting is scheduled to be webcast on the council’s website.