Members and supporters helped minimise losses at Sussex Cricket as the response to the coronavirus pandemic led to a £2 million drop in revenues.

The result was a £26,000 operating loss in the year to the end of last October compared with an operating profit of £408,000 the year before.

Many businesses and organisations use their pre-tax profit or loss as a benchmark. Sussex Cricket recorded a pre-tax loss of £495,000, compared with a £77,000 loss in 2019.

Bob Warren, who chairs the board, said in the annual report: “I think it is fair to say that the 2020 season was unlike any other in our history

“It was clear at the time of the last year’s AGM (annual general meeting) that we would facing potential problems.

“But I don’t think anyone realised the impact that covid-19 would have on our normal lives and in particular sport.

“As an organisation we were faced with potentially no income for the foreseeable future. We were not alone. All 17 of our fellow counties were in the same boat.

“The ECB (England and Wales Cricket Board) is often criticised. However, as soon as the dire financial situation became fully apparent, the ECB confirmed to all counties that the distribution of funds expected in 2020 would be maintained.”

Sussex Cricket held its AGM online on Tuesday evening (30 March) when members were also reminded that playing and non-playing staff had taken temporary cuts to their pay. Some staff were furloughed.

Mr Warren added: “The last year has been a major test for the organisation, the players and the staff.

“However, all have come through relatively unscathed thanks to the collective and selfless contribution that makes Sussex such a special club.

“I would like to thank our members and partners for being part of that. I am proud of how we have come together during this extremely challenging time and am looking forward to a much more productive year, both on and off the pitch.”

Chief executive Rob Andrew said: “The efforts made by all staff and players last year were fantastic.

“For many people it has been a very challenging 12 months – and sports clubs are no different.

“We set out early in the pandemic to protect the long-term health of our people and the business. I am pleased that we have been able to achieve that and set our vision for the next few years both on and off the field. 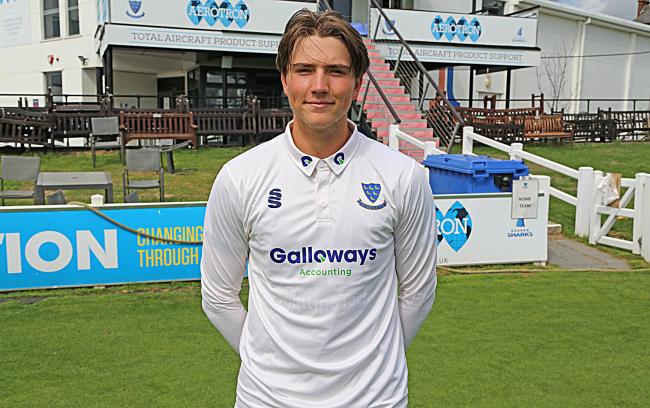 James Coles, who turns 17 tomorrow, became the youngest ever first class player for Sussex when he made his debut against Surrey at the Oval last September

“I am very optimistic about our future with a very talented group of young players and the exciting construction of phase one of our masterplan for the 1st Central County Ground.

“Just as importantly, our community cricket activities continue to go from strength to strength, making a huge impact across the whole county.

“We are all looking forward to a packed summer of cricket and bringing smiles back to people’s faces.”

Jon Filby, who chairs the Sussex Cricket Foundation, a subsidiary and registered charity, said: “The last year has shown that cricket has such an important part to play in bringing communities back together.

“We are looking forward to another exciting summer of cricket for all in cities, towns and villages across Sussex.”