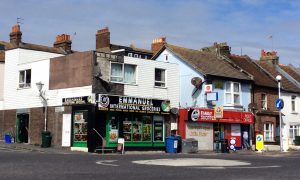 A post office boss has been granted planning permission to build three new flats next to a roundabout in Brighton.

Vijeyaratnam Thivakaran, who runs the post office in Whitehawk Road, plans to link two neighbouring buildings. One is the post office itself and the other is the grocers next door, on the corner of Bristol Gardens.

Mr Thivakaran’s plans include demolishing the first floor of the corner store and turning it into a four-storey building.

The end result is intended to be four modern flats instead of two outdated ones, while keeping the ground floor for commercial use.

The plans were approved by Brighton and Hove City Council’s Planning Committee at a virtual meeting yesterday (Wednesday 7 April).

Labour councillor Daniel Yates said: “This is not the prettiest of developments although it may be a lot prettier than what is there already.”

Councillor Yates said that the proposal made better use of the site and, overall, the negative effects of the scheme appeared to have been minimised.

Conservative councillor Carol Theobald said: “It’s too tall and it will stick out too much.”

Labour councillor Nick Childs said: “The current building is something of a monstrosity. I drive past it regularly.”

He welcomed the prospect of modern homes in place of “the horrible building that’s there at the moment”.

Independent councillor Bridget Fishleigh said that she had asked about road improvements at the roundabout which she said was dangerous.

But, she said, she had been told that officials were too busy creating new cycle lanes to do anything about it.

She added: “People having near misses every day is quite low down their list of priorities. It’s an extremely dangerous area there.”

Bristol Gardens had become a rat run as a result of the traffic lights at the Arundel Road end of Eastern Road, she said.

The council’s Planning Committee voted nine to one in favour of the scheme, with only Councillor Theobald voting against it.