The council plans to replace weekly rubbish collections with weekly food waste collections and pick up the “residual” rubbish once a fortnight.

It would also pick up glass and other recycling in separate vehicles every two weeks and continue to provide fortnightly garden waste collections for a fee.

The proposal is Brighton and Hove City Council’s “preferred option” out of five options for change that would enable the council’s rubbish and recycling service Cityclean to bring in weekly food collections.

In areas with communal bins, the frequency of collections would remain the same, with food waste containers added to the mix.

The proposed changes come as the government requires all councils to bring in weekly food waste collections by 2023.

A report to councillors said: “The introduction of food waste and the reduction of residual collection frequency, when undertaken together, can provide a balanced approach to delivering performance change and maintaining costs.”

But before any change is made, the council plans to carry out a feasibility study, draw up a business case and consult residents, staff and unions.

The plan to bring in food collections in Brighton and Hove is due to be debated by the council’s Environment, Transport and Sustainability Committee next Tuesday (22 June).

Another option would be to bring in weekly food collections and collect the rest of rubbish each week too – but council bosses expect this to cost £1 million a year more.

The council’s preferred option would be expected to cost about £30,000 a year less than the current set up.

Either way, new bin lorries would be needed – and earlier this year councillors approved a plan to spend an extra £1 million a year renewing the Cityclean fleet.

As a result, the budget went up from £1.5 million a year to £2.5 million as the council seeks alternatives to its predominantly diesel-powered current fleet. 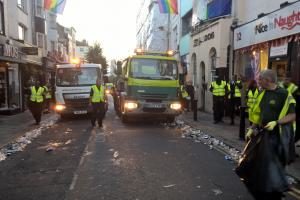 Cityclean staff at work in St James’s Street in Brighton

The council would also need to spend money on providing every home with a food waste bin although officials hope to recover at least some of the cost from the government.

The report to councillors said that bringing in weekly food collections could send kerbside recycling rates could rise as much as 17 per cent.

Last September, Cityclean analysed kerbside rubbish collections and found that 37 per cent was food and drink – and more than half of that was packaged food.

The council’s Environment, Transport and Sustainability Committee is due to meet at 4pm next Tuesday (22 June). The meeting is scheduled to be webcast on the council’s website.