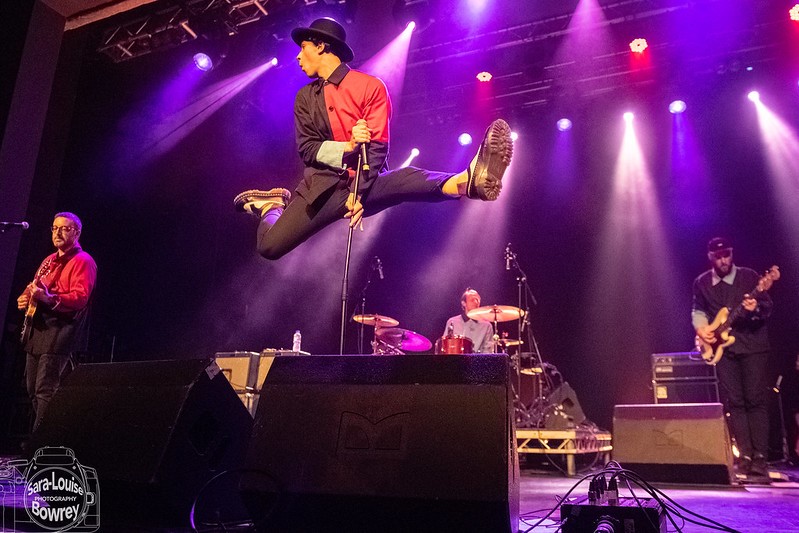 Newcastle 5-piece Maxïmo Park burst onto the music scene in 2005 with a hit single ‘Apply Some Pressure’ and a Mercury Prize nominated debut album ‘A Certain Trigger’. Their energetic and angular art rock has maintained a loyal following over the years, and all seven of their studio albums have placed in the Top 20 of the UK charts. The current offering, ‘Nature Always Wins’, narrowly missed the top slot.

The band has a visually striking and charismatic frontman in vocalist Paul Smith, notable for his trademark hats and energetic scissor kicks. Guitarist Duncan Lloyd and drummer Tom English are the other core members, these days supplemented by touring players Andrew Lowther on bass and Jemma Freese on keyboards. 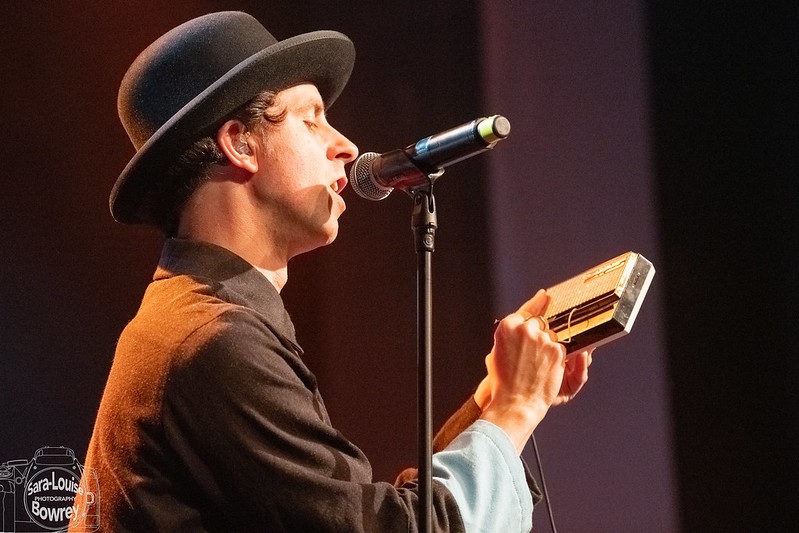 ‘Nature Always Wins’ was recorded remotely with the band in isolation during 2020, and released in February 2021 during continuing pandemic restrictions. A series of promotional performances in record stores, including Music’s Not Dead at the De La Warr Pavilion in Bexhill-on-Sea, had to be scheduled for later in the year in the hope of actually being able to proceed. Ticket sales for the Bexhill show, initially selling well, were apparently halted due to uncertainty whether the date would need to be changed. Whatever the reason, tonight we find ourselves in the main auditorium of this magnificent icon of modernist architecture with a crowd that is impressive for an in-store, but slightly underwhelming for a main stage gig. The patrons who are here doubtless appreciate the extra grooving room, and there’s nonetheless a palpable buzz of anticipation that we’re in for something special.

The houselights dim just after 7.45pm and there’s a loud cheer as the band comes on to the accompaniment of Van Morrison’s ‘Latest Record Project’. They clearly have a sense of humour. Paul Smith is witty and charming, initially singing along, before explaining why they’re here and thanking everyone for getting ‘Nature Always Wins’ to number two in the charts. One advantage of showcasing a record that’s been out for six months is that all the songs will already be familiar to the faithful fans. As the distinctive keyboard line strikes up, it’s clear we’re starting with ‘All Of Me’, an atmospheric and expansive number from the latest album. 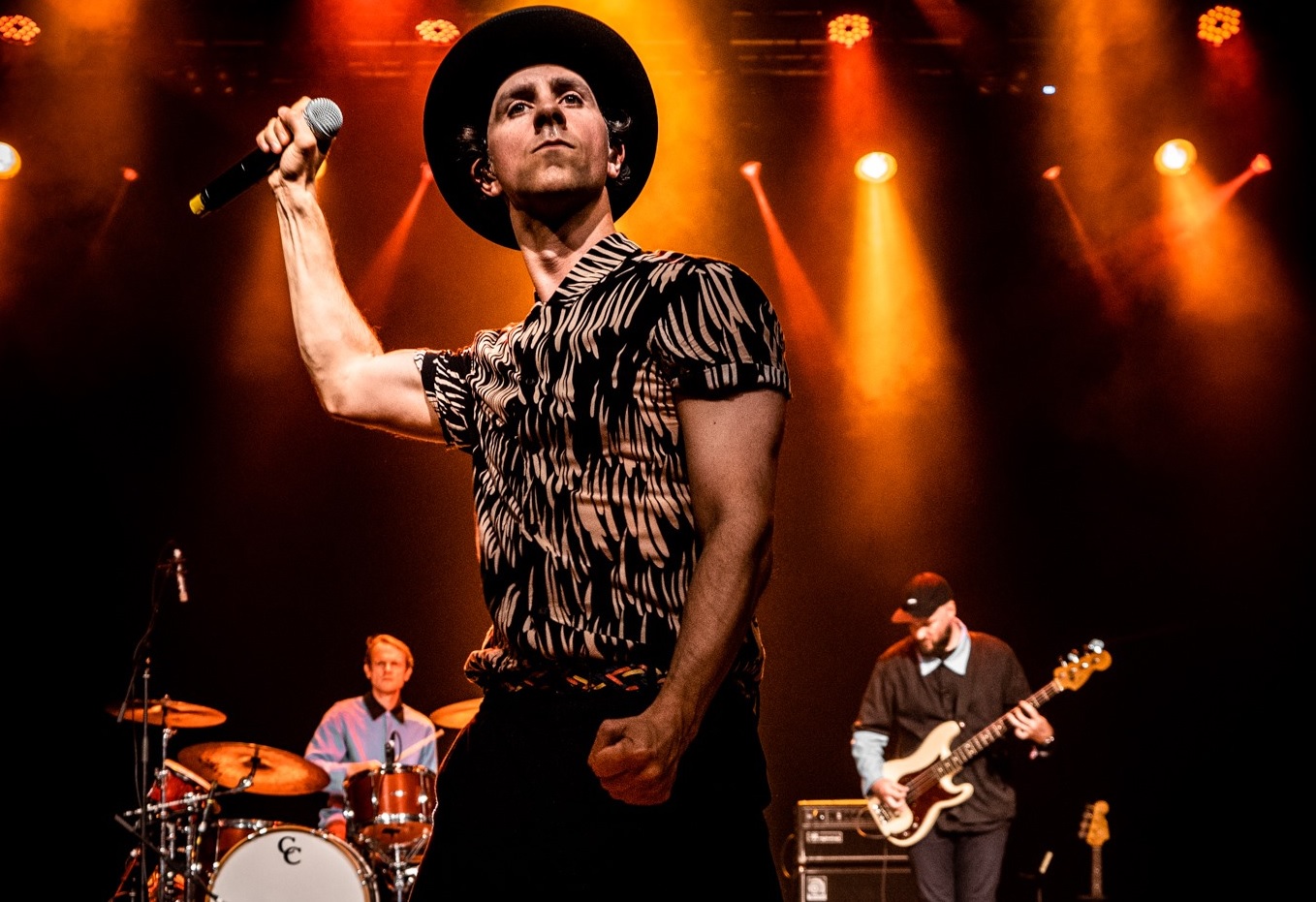 The band looks great, dressed in stage overshirts in contrasting squares of solid colour. Made by Scout and Rae of Newcastle, the designs are vaguely reminiscent of the abstract art of Piet Mondrian. House left is Duncan Lloyd, in black rimmed specs and playing a Westone Rainbow semi-acoustic guitar. Drummer Tom English appears cool and relaxed, rolling round the toms of a C & C kit with languid ease. Andrew Lowther’s baseball cap seems slightly incongruous atop his op-art shirt, but he’s pumping out killer basslines with consummate ease via a white Precision and a black Ampeg stack. House right, Jemma Freese has perfected her technique of dancing whilst playing her Nord Electro 6 keyboard, and looks genuinely delighted to be here. Centre stage, and centre of attention of course, is Paul Smith. He is a very physical performer, using his body as a visual counterpoint to some powerful vocal lines. The trademark hat is tonight a wide brimmed bowler, possibly an uncreased Homburg, that reminds me of the droogs in the film ‘A Clockwork Orange’.

Second number ‘Ardour’ is for me one of the standout tracks on the new record, with its jarringly infectious rhythm. “Swiping in my sleep, pinch grab a magazine,” sings Paul, pinch grabbing the air theatrically. Jemma provides the backing vocal, notably performed on the album by Pauline Murray from Penetration. There’s a long play out, during which the frontman produces a Stylophone, a tiny analog synth operated with a stylus. Almost every home seemed to have one in the late 1960s, and its distinctive sound most famously featured on David Bowie’s ‘Space Oddity’. He seems to be having fun with it. 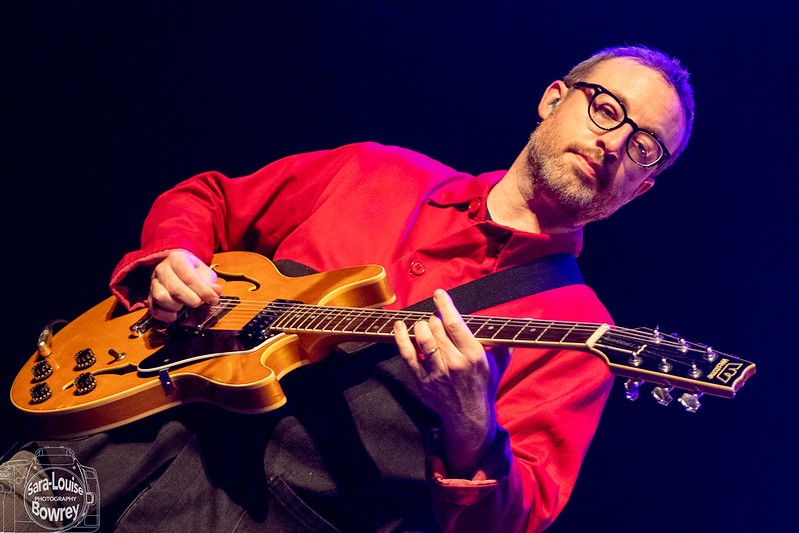 A vigorous stage kick launches the familiar ‘Books From Boxes’, a chart hit from the second album, back in 2007. ‘Meeting Up’ is a dancy but reflective piece from the latest collection, with a 1980s post-punk feel accentuated by its haunting synth line.
There’s an endearing explanation of the lyric of recent single ‘Baby, Sleep’, justified by being about an actual baby. Whatever the inspiration, it’s an impressively catchy piece of angular pop.

‘What Equals Love?’ from 2017’s ‘Risk To Exist’, is notable for the inclusion of Paul’s famous scissor kick move, a mid-air splits given extra height by vaulting on the mic stand. I’m hugely impressed that someone old enough to have been in a band for twenty years can pull off a move like that. I’m equally impressed that he remembers playing that here in The De La Warr Pavilion four years ago. Between songs he comes across as a thoughtful, charming and thoroughly nice person. 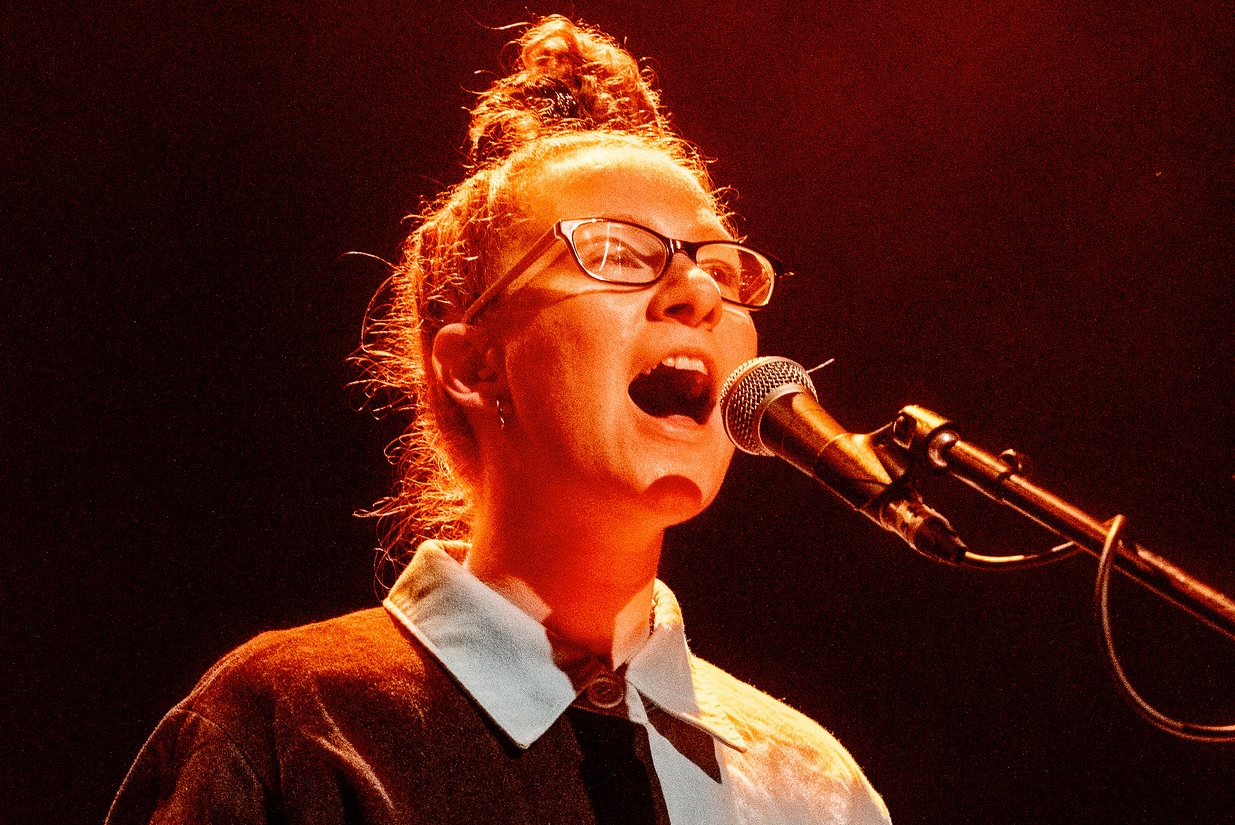 The band are on top form too. The guitar driven ‘Placeholder’ brings to mind the 1980s college rock of R.E.M. while ‘I Want You To Stay’, from the 2005 debut album, is punctuated with powerful rhythmic stabs and impressively brisk drum flourishes. The crowd around me is getting very excited and the frontman seems thoroughly pumped and up for it.

Seven albums in, the band still has something to say. “Why must a building burn before a lesson is learned?” has an obvious contemporary relevance accompanied by a catchy tune. ‘Our Velocity’ is a big hit from 2007, and I stop taking notes to flail about with ecstatic abandon. There’s plenty of space, for once. 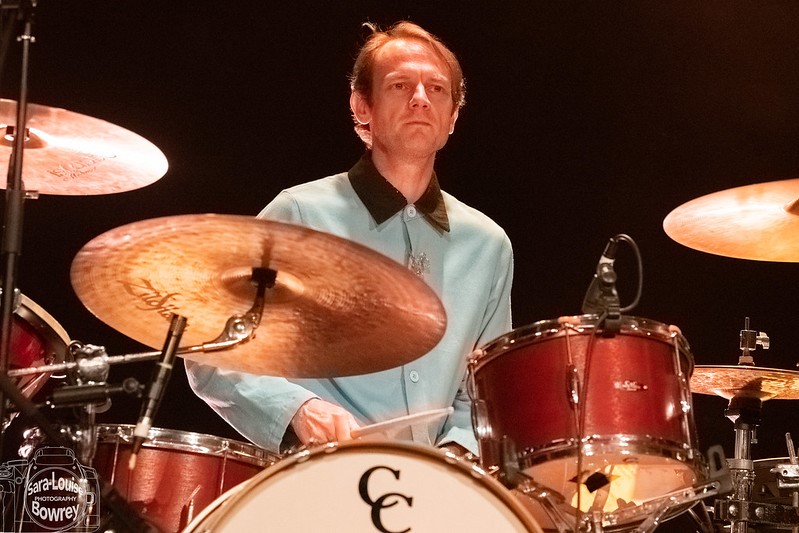 Introducing ‘Child Of The Flatlands’, whose poignant lyric provides the latest album’s title, Paul takes time to thank Music’s Not Dead for their support in selling the album, which is a lovely gesture. It’s a moving number, beautifully played. Indeed, the singer remarks that it might be the best they’ve ever played it. His closing speech is drowned out by a loud burst of spontaneous applause and cheering from the audience, who seem to appreciate how genuinely pleased the band are to be playing again, regardless of the circumstances.

We close with ‘I Don’t Know What I’m Doing’, a scorchingly hot bass-driven pop groove that is my personal favourite from the new record. People around me are utilising all the available floor space for energetic and enthusiastic dancing, and the tumultuous applause at the end insistently demands an encore. 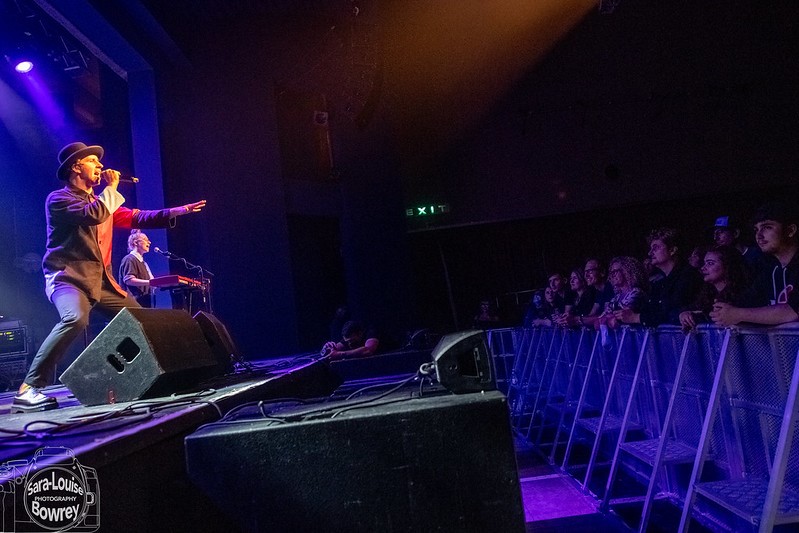 The band obliges with two more excellent tracks from ‘Nature Always Wins’: the big riff of album opener ‘Partly Of My Making’ and the steady build of ‘Versions Of You.’

“We always have fun on the South coast,” says Paul, thanking everyone once again. “It’s a long way from Newcastle, but it’s nice to feel at home somewhere.” The band launches into the breakthrough hit ‘Apply Some Pressure’ and the frenzied dancing resumes with gusto.

Music’s Not Dead is a record shop with a unique location within an iconic building and arts complex. It has hosted some very special in-store and out-store shows, and tonight’s was absolutely up there with the best of them. This was a superb evening’s entertainment, and everyone I spoke to afterwards was buzzing with excitement and blown away by the sheer intensity of the performance. 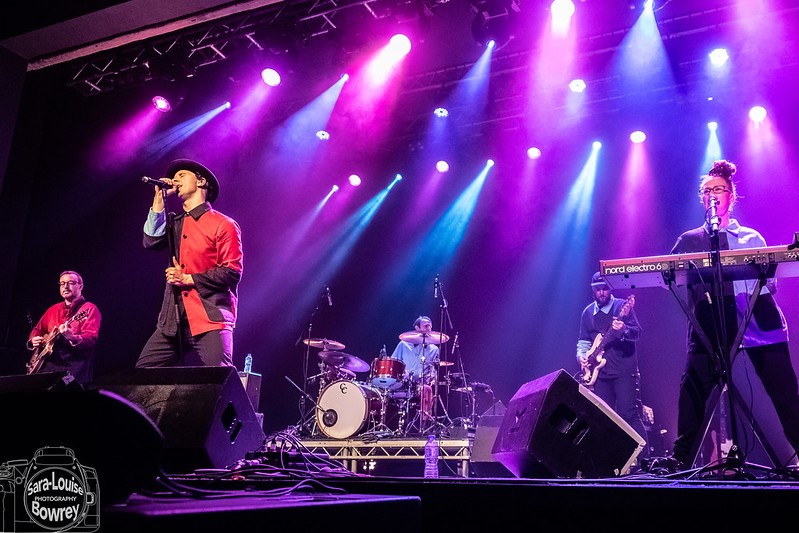 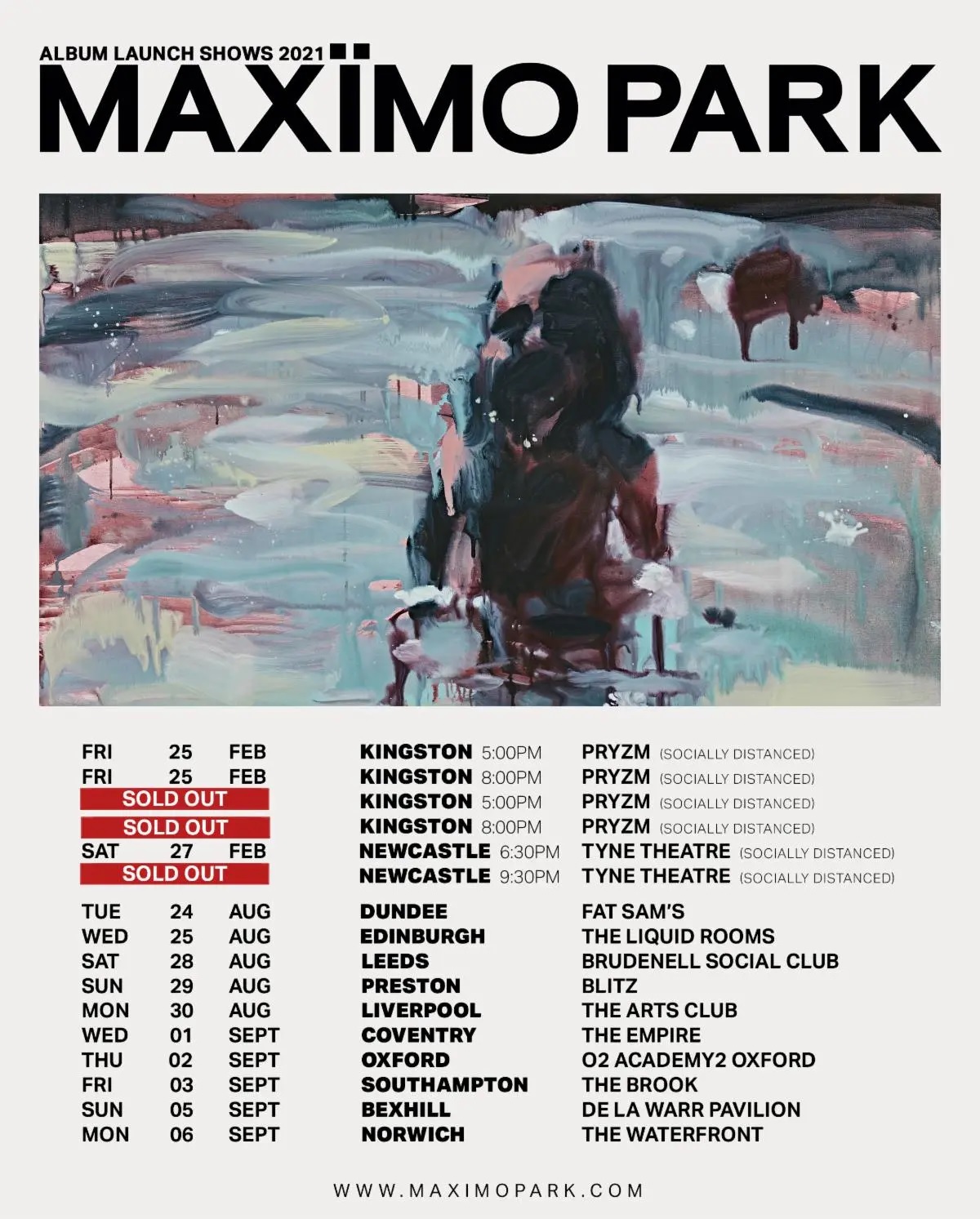