A medical student has been given a 15-year sentence for throwing sulphuric acid over a junior doctor in Brighton.

Milad Rouf, 25, will spend up to 11 years in prison and four years on extended licence – and will have to spend at least two thirds of the jail term behind bars.

Rouf, of Newport Road, Roath, Cardiff, threw sulphuric acid in the face of his ex-girlfriend, Rym Alaoui, on the doorstep of her home in Steine Gardens, Brighton, in May.

Dr Alaoui was a junior doctor at the Royal Sussex County Hospital, in Brighton, but has been unable to work since the attack.

Judge Christine Laing, the honorary recorder of Brighton and Hove, said that Rouf carried out the attack six weeks after Dr Alaoui ended their relationship.

They had started seeing each other while they were medical students in Cardiff.

The judge said that he had meticulously planned the attack, carefully disguised himself and lied about it afterwards.

She said that he was dangerous and that the length of the sentence reflected the need to protect the public.

Rouf pleaded guilty in August to throwing acid over Dr Alaoui in an attempt to burn, maim, disfigure or disable her.

Flora Page, prosecuting, said: “He used padded clothes and make up to appear as though he were a large black woman.

“He was wearing a sunglasses, a face mask and visor. His disguise was effective as Dr Alaoui did not recognise him.”

When Dr Alaoui answered her door, he did not speak but handed her a note also intended to make it seem as though he were someone else.

As she looked down to read the note, he threw the acid in her face. Only her quick thinking in rushing to shower herself prevented her injuries from being worse. 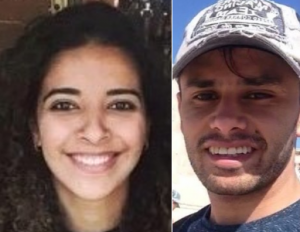 Sussex Police investigator Rose Horan read a statement made by Dr Alaoui. She said: “My life has changed tremendously. I live in constant physical and psychological pain.

“I have suffered substantial physical injuries … severe damage to my right eye (which I am still unable to see out of), damage to my eyelids and the skin of my face, neck, chest and arm. I am unable to fully move my neck or close my eyelids.

“I have had five painful life and appearance-altering surgeries.”

And she would face many more hospital appointments, procedures and operations, she said.

Dr Alaoui added: “I have been robbed of years of my career and young adult life.

“The psychological effects of this attack have been colossal on me, my family and loved ones.

“I cannot begin to imagine how or why someone would commit such a horrible premeditated act.

“It is impossible to fathom, find peace with or justify what was going on in his mind.”

She thanked those who had helped her including the first responders and detectives from Sussex Police.