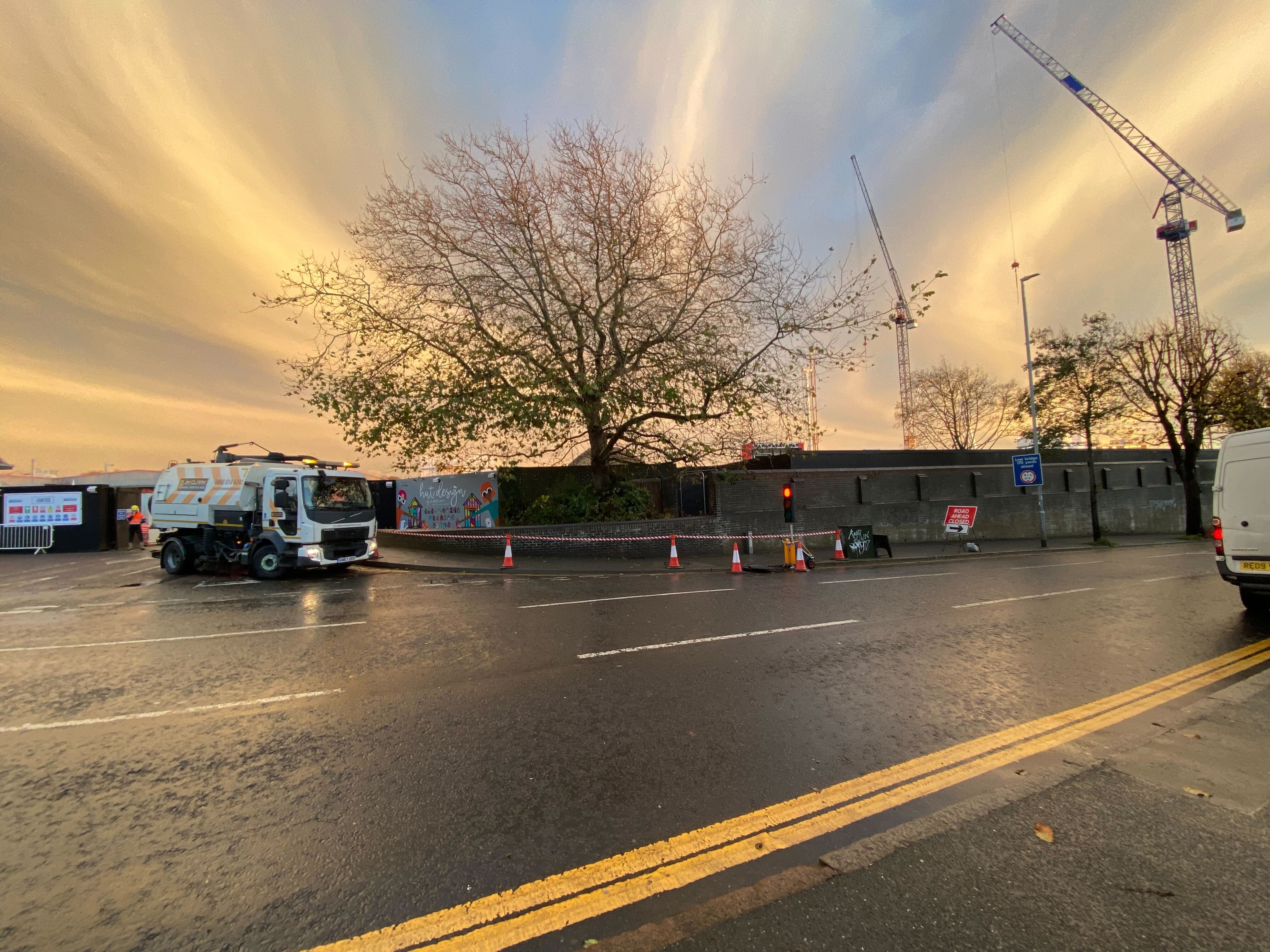 Concrete getting into a sewer underneath a major building site has sparked emergency roadworks which are set to continue into next year.

Southern Water started work on November 26 to clear the sewer, which runs alongside the Sackville Road site where Moda Living is building more than 800 homes.

Temporary traffic signals were put in place while specialist contractors moved in to clear the blockage.

These were only meant to be in place until December 10 – but a few days later, on December 1, Brighton and Hove City Council announced it was also temporarily restricting access from Old Shoreham Road to improve traffic flow and reduce delays.

It also closed the Sackville Road junctions with both Prinsep Road and Landseer Road.

Brighton and Hove Buses has diverted buses as a result, and told passengers this is set to continue until January 3.

Southern Water said: “We are undertaking emergency works on a wastewater main on the corner of Sackville Road, Hove, and apologise for the inconvenience these works are causing to local road users.

“These works are necessary due to concrete entering the drains due to a third party – please can we remind people that drains shouldn’t be used for anything other than water.

“We hope that road users can seek alternative routes to avoid delays.”

A spokesman Moda Living’s construction partner Midgard said: “A blockage in a sewer that runs close to our site was identified last week. The cause of this blockage is currently under review.

“To rectify the problem as swiftly as possible and to get access to the sewer a lane of traffic has been temporarily closed on Sackville Road.

“We’re working closely with Southern Water to expedite the works and apologise for any disruption caused.

“As part of Midgard’s commitment to working closely with the local neighbourhood we have created a Community Liaison Group made up of local residents and stakeholders.

“Midgard will work closely with this group and others to keep them informed of the situation.”

A spokesman for Brighton and Hove City Council said: “We have had to close a stretch of Sackville Road on a temporary, emergency basis because sewer pipes there have been damaged.

“The damage was caused by developer Moda Living and their contractor, not the council. Southern Water is working urgently to fix the problem.

“To keep traffic moving, we have put in access restrictions to Sackville Road from Old Shoreham Road and set up a diversionary route.

“We have also restricted access on the Sackville Road junctions with both Prinsep Road and Landseer Road.”

Moda’s PR agency also provided a further statement from Southern Water’s network protection and enforcement officer Stephen Edwards, who said: “We are undertaking emergency works in Sackville Road to clear a blocked sewer main and are sorry for the impact this is having on local road users and residents.

“We have employed specialist contractors and equipment to try and clear the accidental blockage as quickly as possible, and our priority is to maintain services to local people, protect the environment and restore the sewer network.

“We are being supported by, and will continue to work closely alongside Midgard.”

Brighton and Hove City Council granted permission for the £260 million scheme, which includes 564 flats for rent and 260 retirement flats on the site of the Sackville Trading Estate and Hove Goods Yard, in March last year.

Work began on the site in October.