A burglar has been jailed for six years after breaking in to two homes in Brighton and Hove, injuring a woman in one of the burglaries. 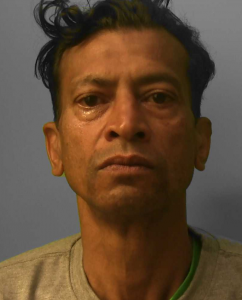 Sussex Police said: “Lynden David, 57, of no fixed address, was sentenced to six years in prison on Wednesday 22 December after being found guilty of two counts of burglary.

“The first incident took place on 15 July when a resident of Brunswick Terrace, in Hove, was notified of transactions being made on her credit card which she believed she had left secured in her home.

“When she returned to her flat she discovered the front door had been forced open and the property had been searched.

“A number of items including cash and jewellery worth around £1,790 had been stolen.

“David was identified as a suspect after his fingerprints were found at the scene.

“Two days later, a woman in Bartholomews, in Brighton, was woken up by an unknown man entering her flat.

“He grabbed her purse and a struggle ensued, after which she injured her foot while pursuing him out of the building.

“David was identified as a suspect by the victim’s description and officers’ knowledge of his usual methods.

“Officers on patrol in Brighton spotted David on the seafront on 18 August and after being arrested a search found gloves and makeshift items typically used to open locked doors.

“The next day he was picked out of a line-up by the second victim, charged with two counts of burglary and remanded in court.”

Detective Chief Inspector Cath O’Connor said: “Lynden David is a committed criminal who carried out both of these offences while wanted for arrest in relation to a separate charge.

“These undoubtedly traumatic break-ins caused significant harm to the victims and we thank them for their support in securing this conviction.

“David’s arrest in August was also a great example of proactive policing by officers who understand their communities and are able to swiftly recognise the people of significant interest within them.”