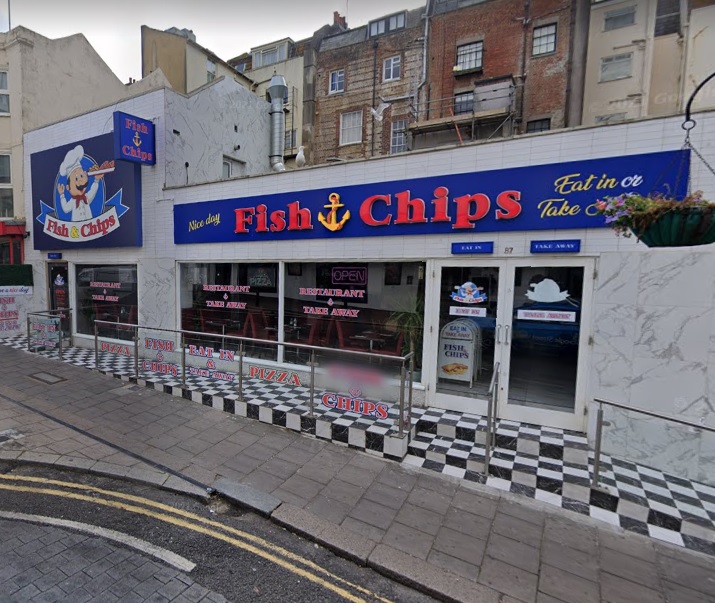 A Brighton chippy has failed in its bid to get permission for a “garish” outdoor seating area and “unsightly” oversized signs.

Fish and Chips at the bottom of Preston Street built the concrete ramp and seating area on the pavement outside the restaurant and installed the signs in March 2020.

However, owner  Abbanoub Salama did not apply for permission for the work until July 2021, more than a year later.

Now, Brighton and Hove City Council has refused both planning applications, which means the restaurant could face enforcement action if they are not removed.

Of the outside seating, including the marble tiling, handrails and chequerboard floor, she said: “The existing arrangement appears crude, poorly designed and at odds with the appearance of the front elevation and other seating areas on Preston Street which retain an open character.

“In addition, it is considered that the flooring also interrupts the material palette with an unsuitable pattern. The black and white tiles are visually intrusive over such a large, raised frontage.

“The existing marble cladding does not fit flush with the tiling and does not align with the window heads. The treatment of this elevation appears at odds with the render treatment that is typical for the area.

Of the signs, she said: “Overall, it is considered that the choice of material, the excessive size and the positioning of the signage in relation to the host building, would appear out of character and harm the appearance of the shopfront and wider streetscene.”

Among those objecting was an organisation whose details were redacted, but which said it was objecting on behalf of people living in the Regency Square area.

It said: “In 2017 a former business at these premises, Meze Club Mediterranean Cuisine, installed temporary wooden seating and decking. No planning approval was sought for these temporary structures.

“The current applicant has replaced those temporary wooden structures with permanent concrete and tiling, effectively claiming the pedestrian public right of way as though part of the business premises.

“Without commenting on the legality or otherwise of this blatant land-grab, it must be stressed that the proposed (now retrospective) development in no way respects or improves the character of the Regency Square Conservation Area.

“The work has produced a hugely incongruous garish utterly out of keeping blight in a conservation area.”

No enforcement notice has yet been served.

Last summer, the chippy failed in a bid to get a series of temporary late licences, which it applied for in the hope of proving it would not add to drink-related crime and disorder in the area.

Mr Salama’s previous application for a permanent 5am licence had been rejected in April.