When a Brighton couple decided to buy a new car, they took their much-loved old Honda for one last spin – to Ukraine. 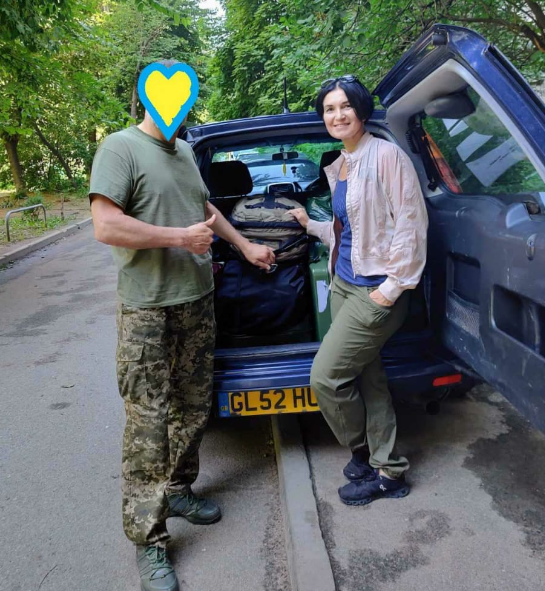 Once in Kharkiv, they handed over the car to the Ukrainian army, along with all the vital supplies that they had been able to carry.

He came to rest on a pale blue and white church. It was still standing. In front, a long line of black, plastic body bags. “Bucha,” he said quietly. We stared, in silence, in disbelief.

Sergei and two other soldiers had rolled up to our flat in Kharkiv in their army truck. They had come for our battered Honda CRV, which we had donated to the Ukrainian Army.

In the car were some supplies we had brought from the UK, made possible by generous donations from friends and families. Some summer combat fatigues and backpacks, field watches, compact solar-powered batteries, camping stoves, some medical kits.

The car, Sergei told us, would be going to an all-female, medical combat team who would use it to evacuate wounded soldiers from the front lines.

We talked solemnly about the war, the strain clearly showing on Sergei’s face. Then he smiled. “Boris Johnson. UK. Very good. Thank you, thank you.”

We hugged and urged him to “stay safe” – and then they were gone, along with our car.

Our journey, which had started with idle talk of “it’s about time we got a new car”, had brought us 2,125 miles across Europe to Kharkiv, my wife Anna’s home town.

It’s just 30 miles from the Russian border and at the edge of a raging, brutal conflict in which civilians, hospitals and schools have been treated as legitimate targets. 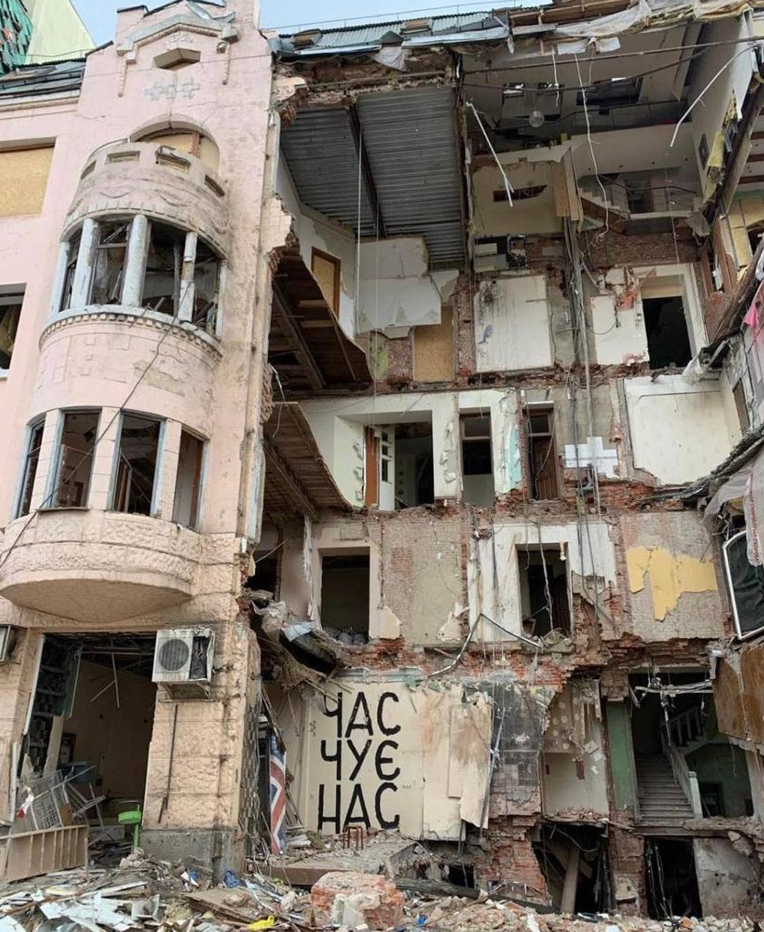 The remains of a building in Kharkiv

Anna had been determined to do something ever since the invasion of her homeland on Thursday 24 February. As an experienced psychotherapist she began working with individuals who contacted her from Ukraine and then with an international organisation in Hungary, spending two weeks a month in Budapest, helping people who had fled the advancing Russians.

But driving home to Ukraine, to help directly, was a chance she wasn’t going to pass up. She contacted friends in Kharkiv who had given up their professional lives to become volunteers, helping their city, their army and their nation, to see what was possible, what was needed.

One, a childhood friend, Alexy Polonchuk, had set up a volunteer group called Vehicles for Ukrainian Guards. It was decided. We were going.

We put out an appeal for some help with petrol money to get to Ukraine. What we got was an overwhelming response which allowed us to fill the car with supplies for several humanitarian organisations along the way as well as the equipment for the army. We thank you all.

When the car was full, we gave the remainder of the donations to another group fundraising to buy electronic jamming kit that can disable Russian drones. 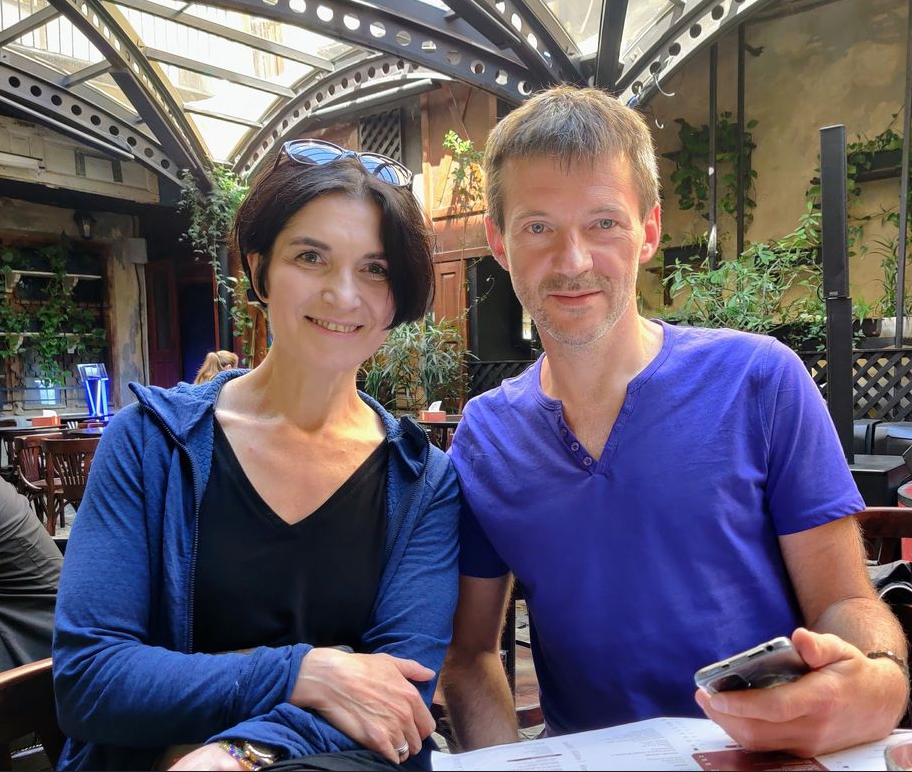 Having organised care for the kids and animals – help came in many forms – we took the Shuttle to Calais and made for Germany and the next day for friends in Krakow, in Poland.

It took a day and several nerve-wracking inspections of the car from stony-faced, heavily armed officials to cross the border into Ukraine and make it to Lviv. A letter from Alexy helped.

Lviv could have been any ancient European city, with its beautiful squares, historic buildings, the opera house, parks, pavement cafés under parasols, evening jasmine …

But it also had sandbagged churches, statues wrapped and boarded and walls with pictures of the dead soldiers – ordinary people, some smiling, some formal, some their favourite picture. At their feet on the pavement, and taped to the wall, wilted bunches of flowers and “Slava Ukraini!” 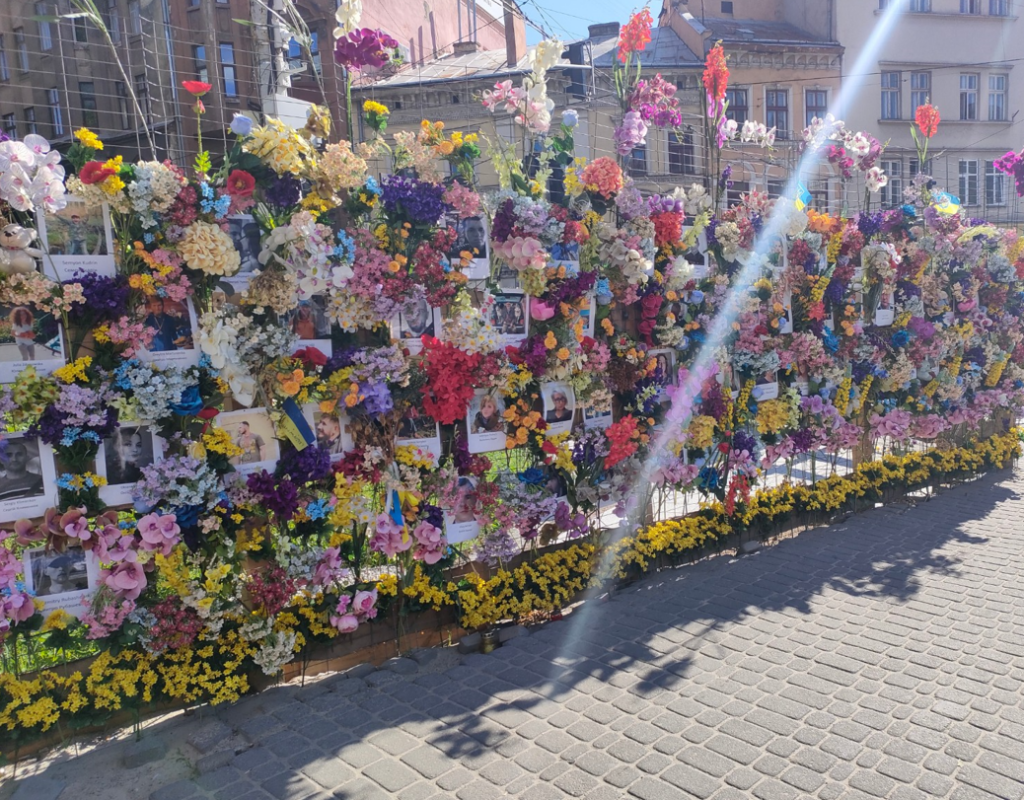 Tributes to the fallen in Lviv

We drove on to Kyiv, to see Anna’s father, Oleksiy. Once a champion mountaineer, he is frail now, blind and in his late eighties.

He had lived in our flat in Kharkiv, looked after by Lyuda. She would come into the city from her small town to care for him. When the Russians got too close in those early days, she took him home.

When they approached her town, our friends drove Lyuda, her own elderly mother and Oleksiy to Lyuda’s son’s flat in Kyiv, which then seemed safer, after the Russians had been driven from the gates.

Her son is in the army while her daughter-in-law and children moved to Holland when the conflict started, so the flat was empty. So many people on the move. Such is the displacement of war.

In Kyiv, Anna ran some workshops for human rights lawyers who are documenting Russian war crimes in places such as Bucha. Workshops on how to deal with severely traumatised people, many of whom had suddenly lost everything, and how the lawyers themselves could keep their own mental balance in the face of such horrors. They were a young, friendly bunch dealing with a depravity that is the stuff of nightmares. 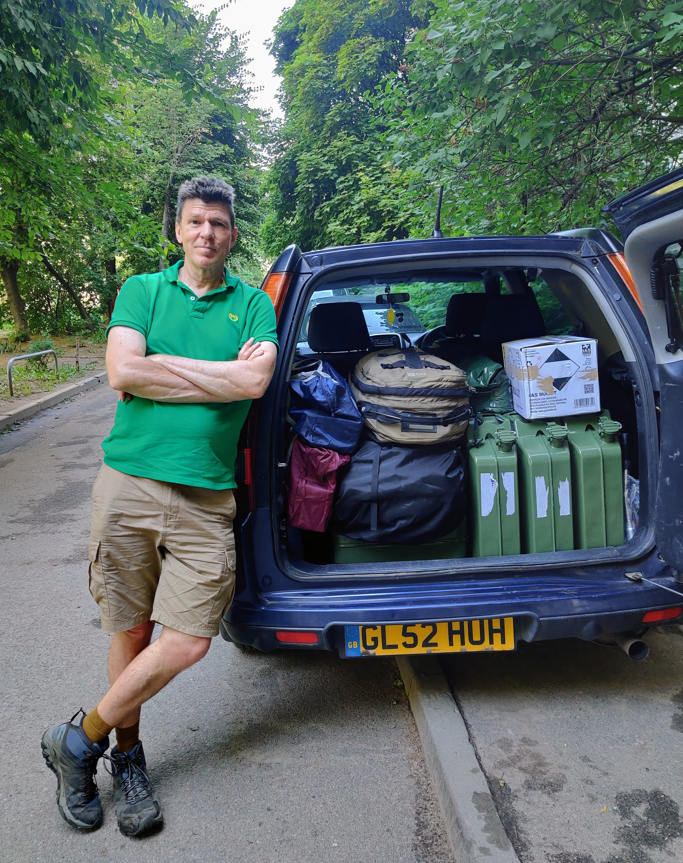 Paul Smith prepares to hand over his old car

We left the next day for Kharkiv. The country was open, rolling, verdant and the roads, going east, were wide, smooth and quiet, punctuated only by army roadblocks and the regular passing of ambulances, sirens wailing, as they brought the seriously wounded from the front to hospitals in the capital.

We had brought Jerry cans, filled in Poland, as petrol was scarce. They got us to Kharkiv.

We drove through the city centre, past the ruined city administration building on Freedom Square, the largest square in Europe, that had been infamously hit by a cruise missile in the first few days.

We drove down familiar streets where random buildings were crumpled in a tangle of brick and glass, twisted metal, broken furniture and tattered curtains. Just aimless, mindless shelling leaving blackened holes in the fabric of the city.

We pulled tentatively into our estate, ordinary blocks of flats set around gardens. Our block looked unscathed. We breathed a slight sigh of relief.

The flat had a musty smell, some rotting pumpkin in a cupboard, moudly “kasha” in the fridge. The exit had been swift, no time to clean. Plants were wilted but would hopefully revive with a good watering. 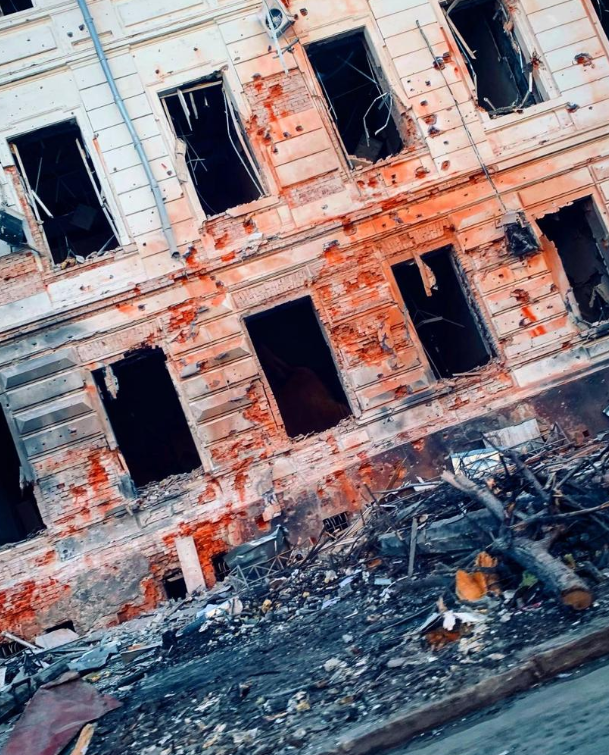 Another badly damaged in Kharkiv

Curfew was 10pm. “The shelling normally starts at 11pm,” said our neighbour, Vadym, who told us of the early days when Russian jets screamed overhead and nearby explosions rocked the building to its foundations.

And so it was. Confusion, random luck, war.

We half-slept, new to the muffled crumps of artillery shells. Next morning after Sergei had left, our volunteer friends picked us up and we went to meet others for lunch. A reunion of the mountaineering club they had belonged to in their younger, carefree days. It was great fun, some friends Anna hadn’t seen for years, although inevitably talk turned to the war.

Lena’s husband, Vadik, made Ukrainian borscht in my honour and gave me a volunteers’ T-shirt which said Building Ukraine’s Future Together. I was touched. I had only taken a drive.

Anna and her friends were saving their country, their culture, their freedom. All of our freedoms. I have no doubt they will succeed. 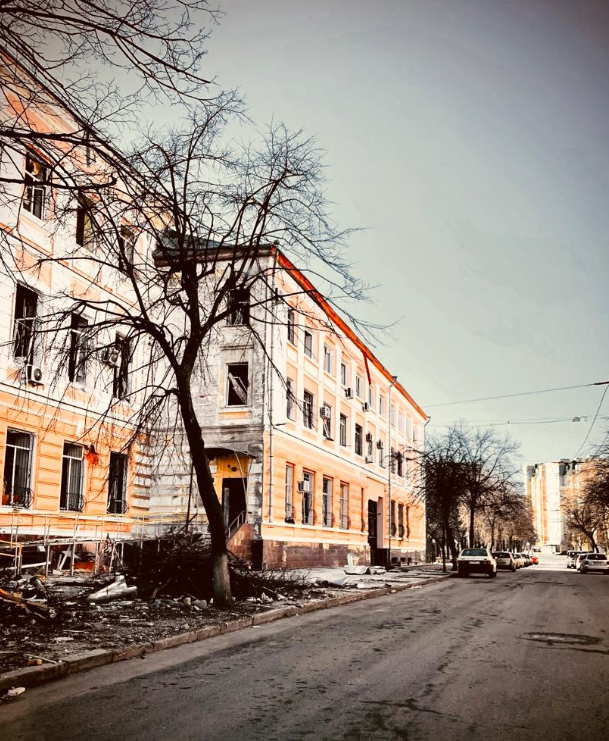 A bombed out street in Kharkiv

To help: Our trip was co-ordinated by Anna’s childhood friend, Alexy Polonchuk, who set up a volunteer movement called Vehicles for Ukrainian Guards. They have so far supplied more than 150 cars to the Ukrainian army for moving men and materials behind the front lines. And they now have 200 volunteers in five countries supplying the Ukrainian armed forces with a variety of much-needed supplies. They plan to open a British branch shortly.