Members of Bear Patrol UK caused a stir on Hove seafront this morning when they posed for a photograph in swimwear and top hats.

A host of bearded and not so bearded men  and women gathered at Meeting Point Cafe before making their way to the beach to recreate Brighton Swimming Club’s photograph from 1863.

Organiser Danny Dwyer said: “I love bringing people together and get them doing something.

“I cannot believe how many people have turned up. It’s beginning to look like a Mad Hatters tea party.”

Approximately 30 people attended the gathering at 10.30am today (Sunday, 21 September).

There were 17 men and two women in the photograph posing in the same positions as the group in the Victorian photograph, which can be seen below – click here for more information about the original picture.

Profits from picture sales will go to Sussex Beacon. 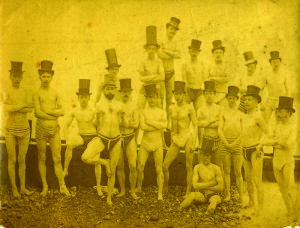 The original 1863 photograph of the Brighton Swimming Club