Fire investigators believe a car fire which led to the evacuation of Churchill Square shopping centre on Saturday started because of a fault in the engine compartment. 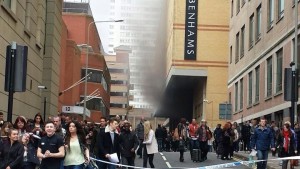 The blaze, which spread to two more cars, led to thick smoke engulfing parts of the car park and belching out into the street.

The shopping centre was evacuated for several hours as a result, with shoppers unable to retrieve their cars, and a dog was rescued from the car park.

Sussex Police quickly ruled out foul play, and today East Sussex Fire and Rescue Service said an investigation had concluded the most likely cause was an equipment fault.

A spokesperson said: “A fire investigation has concluded that a car fire in a Brighton shopping centre car park was accidental.

“Four fire appliances – two from Hove and two from Preston Circus – were sent to the scene at Churchill Square, along with two officers.

“The shopping centre was evacuated as smoke had started to set off alarms in shops.

“Crews used six breathing apparatus and two main jets to put out the fire, which had spread to three cars.

“A fire investigation was carried out and it is believed there was a fault in equipment which started a fire in the engine compartment.”