New steel door covers and fences are being put up around the Brighton Hippodrome to protect it from squatters as its future remains uncertain. 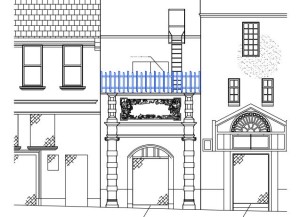 The former theatre, which once played host to the Beatles and the Rolling Stones, was set to be converted into a cinema, shops and restaurants despite a campaign to reopen it for live performances.

But when one of the partners, Vue, pulled out the scheme was put on ice.

Now, leaseholder Live Nation is applying for part-retrospective permission to install higher security at the site after having started to install it late last year.

The application, written by chartered surveyors Michael Jackson Consulting, says:”The reason behind these security measures are because of people attempting to gain access to the building, presumably to squat, as it is empty and seen as an easy target.

“The installations would consist of a perimeter anti-climb fence on top of an existing 7ft wall, similar anti-climb fences on top of low level entrances preventing access to the roof levels, a 3m tall Betafence with gate to the rear of the Palm Tree Court area of the building further preventing access to the high level roof areas, and another Betafence to the side of the rear car park separating an entrance to a nearby unrelated office.

“As well as these fences, steel covers are to be installed over the doors and low level windows on the Middle Street elevation both internally and externally to prevent further break-ins.”

Paul Zenon of the Save Our Hippodrome campaign said: “Before the fences went up recently, they’d had round the clock security with dog patrols since Christmas time – having a manned patrol is very expensive.

“There’s a safety issue with the ceiling and if squatters get injured it would be their responsibility insurance-wise.

“The worrying thing is that with this planning application it sounds like they just want to fall apart until it’s too late to do anything with it.”