Bouncers are being trained in how to soot people vulnerable to sex attacks as part of an anti-rape drive by Sussex Police. 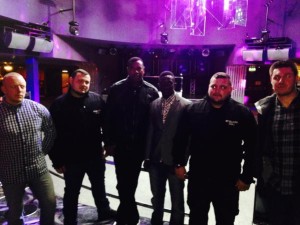 Door staff at this morning’s training session. Picture by @sussexpcc

The first phase of the campaign which featured a poster urging women not to leave their friends alone was withdrawn after campaigners said it blamed victims.

This next stage is concentrating on people who might be able to spot people who are easy targets for sex offenders and guide them to safety.

In Brighton, during the 12 months to the end of March 2015, 247 recorded rapes or other serious sexual offences took place during the evening or night. They represent 68% of the total of all such offences committed in the city during that year.

Chief Inspector Katy Woolford, who identified this particular issue as a risk in the night time economy, said: “For this phase of the campaign, after months of research and talking to partner agencies and people working within the night-time economy, we’re working on finding ways of encouraging people to intervene when someone appears to be vulnerable or at risk to predatory behaviour.

“Door supervisors, taxi drivers, bar staff and groups of friends, or the wider passing public, can take steps to intervene or get help.

“Although the majority of sexual assault is perpetrated by partners, ex-partners and acquaintances, our large towns have a vibrant night-time economy, and a relatively low average age. The combination of these can lead to increased vulnerability.”

Key messages to staff receiving the training include:

The first training session took place in Brighton on Thursday morning, 14 May. More than 25 people who work as door security staff in clubs and pubs in Brighton gathered at Pryzm Club in West Street for a briefing by Chief Inspector Katy Woolford on the issue and how they can help spot the signs and take action.

It is based on training delivered by more than 20 police forces across the country.

Sussex Police and Crime Commissioner Katy Bourne has funded the vulnerability awareness training sessions across Sussex in May and June for officers and staff, and for other people who work in the night-time economy locally.

Katy Bourne said: “I believe that everyone should be able to enjoy a night out in the many vibrant towns in Sussex without coming to any harm.

“However, people sometimes get into situations without necessarily appreciating that they have made themselves vulnerable.

“We all have a social responsibility to protect and support these people so that no harm will come to them.

“The forthcoming training will enable those working in the night-time economy to spot the signs of vulnerability as well as potential predatory behaviour and how to overcome the barriers that can stop some of us from intervening.”

Sarah Morris, Business Crime Reduction Partnership (BCRP) co-ordinator, who has helped to arrange the Brighton training, said: “The BCRP has also been working with door staff to promote their duty of care to help reduce sexual offences in the night time economy.

“Through training and briefings the BCRP is trying to ensure that those working in the night time economy are not only identifying vulnerable individuals but also those who could exploit them.

“Door staff in Brighton have been responsible for some fantastic duty of care work over the past few months and this strand of training provided by Sussex Police will continue to raise this awareness and further develop the ability to truly make a difference.”

The campaign will continue later this year, with future messages focusing specifically on the issues of consent, steps people can take to look after themselves and each other, and on the perpetrators, who are always responsible for their actions.

If you have been sexually assaulted, or know someone who has, you can contact police at any time via 999 in an emergency, or via 101@sussex.pnn.police.uk or by calling 101, and arranging to talk to specially trained detectives.

Partners have also been fully briefed about the campaign. If you are looking for further help or support go to the Brighton and Hove Safe in the City website, the Safe in East Sussex website or phone 01293 600469.

For information about rape, childhood sexual abuse or sexual assault, contact the Survivors’ Network Helpline on 01273 720110 or visit www.survivorsnetwork.org.uk.