A London brewery is intending on following its “customers of tomorrow” to Brighton and buying up pubs in the city. 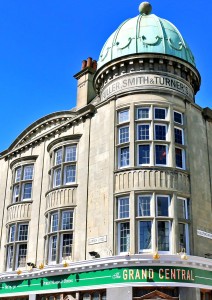 Chiswick-based Fullers is reopining one of its four Brighton pubs, the Grand Central, on Thursday following an extensive renovation which includes a secret roof terrace.

The reopening comes as Fullers’ chief executive Simon Emeny says it is intending on increasing its portfolio in places like Brighton as Londoners are pushed out of the capital by soaring property prices.

Industry newsletter Propel reported Simon Emeny speaking at a London conference: “London has become the property hotspot of Europe. We see a gradual movement for the next generation, who will be forced to buy their first properties outside London.

“This is driving our acquisitions programme … This is where our customers of tomorrow are choosing to move to, to commute into London. It’s very important that they retain an access to the Fuller’s brand.”

The Grand Central was bought from Enterprise Inns in 2011. The company also owns the Basketmakers, the Prestonville, and the Charles Napier.

Meanwhile Enterprise, which has sold off several Brighton pubs for housing in recent years, says it will continue to offload hundreds of pubs – but also convert the leases of 1,000 of its UK properties to free-of-tie.

Some of the first of these, announced this week, are five Brighton pubs leased to the Laine Pub Company, including the Mash Tun.

Gary Pettet, the Laine Pub Company’s chairman, said: “We have been talking to Enterprise about this for a couple of years. They are always ready to listen and have proven themselves to be flexible in helping us reach our objective to operate a free-of-tie estate.”