A young Brighton cancer patient had nothing but praise for the “Pretty Muddy” crowd taking part in the new addition to the annual Race for Life charity fundraisers.

Charlotte Eades, 18, from Withdean, praised Cancer Research UK, which organised the Race for Life in Stanmer Park this weekend.

And she was at pains to stress that cancer doesn’t have to ruin your life.

Charlotte is an avid YouTuber, vlogging about the disease and the way that she has dealt with it since her diagnosis at the age of 16.

She painted on muddy war paint last week to encourage women to enter the Pretty Muddy 5k assault course – with added mud. The events were held on Thursday (2 July) and Saturday (4 July).

After being told that she had an inoperable brain tumour two years ago – just after taking her GCSEs – she underwent radiotherapy treatment. She has since been having chemotherapy which has shrunk the tumour.

She said: “It’s difficult being a teenager anyway and since having cancer my life has changed drastically.

“But I do want to let people know that cancer doesn’t have to ruin your life and it doesn’t change you as a person. I’m still me!

“The outlook I was given two years ago was pretty poor but I’m still here, giving cancer a good kicking. Supporting Pretty Muddy is one way of doing that. 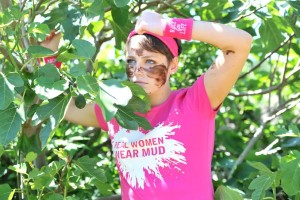 Every day, 120 people are diagnosed with cancer in the South East. That’s why Cancer Research UK calls on women and girls to fight back against this devastating disease by taking part in the Race for Life.

Money raised through Race for Life allows Cancer Research UK’s doctors, nurses and scientists to advance research which is helping to save the lives of men, women and children.

Cancer survival rates have doubled since the 1970s and Cancer Research UK’s work has been at the heart of that progress.

But more funds and more supporters are needed to bring forward the day when all cancers are cured.

Jenny Ainsworth, Cancer Research UK’s event organiser, said: “We’re calling on the women and girls in Sussex to lace up their trainers and take on cancer at this year’s events.

“The atmosphere is electric, our participants are so inspiring and we’re calling on women to help make 2015 our best year yet.”

Ms Ainsworth said: “All Race for Life events are not competitive. It’s not about being fit or fast.

“Women can complete the Pretty Muddy course at their own pace, climbing, jumping, walking and laughing their way around.

“It’s about an army of women coming together in the fight against cancer.”