Four pupils from Patcham High School grabbed the organisational reins at Brighton Racecourse to find out how tough the going can get as a manager at the venue.

The youngsters, Gregor Shaw and Callum Collins, both 15, and Jacob Roberts and Ellis Markwick, both 14, saw what was involved in running the racecourse for a day.

They shadowed people on a race day, including in the stables where they learnt how each racehorse’s identification and microchip must be carefully checked.

They then heard from clerk of the scales, Leigh O’Brien, who explained the rules and regulations for jockeys. The pupils weighed each other in and out.

The four also heard from former Desert Orchid jockey, Colin Brown, who talked about his career as a race day presenter.

And they were given a bird’s eye view of a race from the judge’s box where they were they helped to announce the placed horses.

One of the highlights of the day for the boys was their course walk alongside groundsman Joe Panther to the start of the first race. 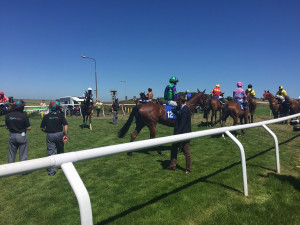 He showed the boys the checks that he has to make to the turf. And he told them that Brighton Racecourse is the only course in Britain where horses race over a working road, requiring the use of a special surface overlaid with grass.

Jacob said: “We had a great day at the racecourse and were amazed at how many people it takes for everything to come together on the day.”

Callum said: “The best bit was definitely getting up close to the horses at the start of the first race.

“We helped check the stalls were working and then saw the horses all load in for the race.”

Brighton Racecourse marketing manager George Hill said: “It was great to have the Patcham High School boys at the racecourse. 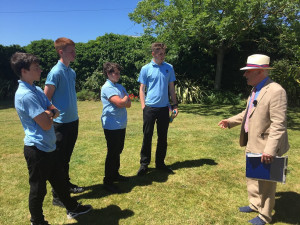 “They were keen to learn about the sport and I think they were surprised at the variety of jobs within their reach in the racing industry.

“We’re delighted to have been able to show off our industry to these youngsters and hope we have inspired them for their future careers.”