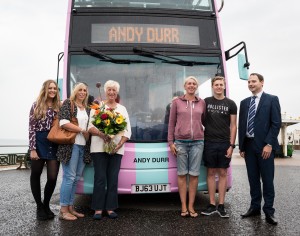 The Durr family with the Brighton Beach Bus. Picture by jimpix.com

Two new Brighton and Hove buses have been unveiled this week, both celebrating aspects of the city’s vibrant cultural scene.

The bus company’s new Beach Bus was launched this morning, dedicated to the late Andy Durr who masterminded Brighton’s seafront revival, and who died in December.

And Pride has also today released images of the first Pride branded bus, which is in service on a variety of routes throughout the city proudly displaying the name of late drag queen and charity fundraiser Phil Starr.

Andy, also known as Mr Seafront, was a Labour councillor and helped found the Brighton Fishing Museum as well as sitting on the board of the West Pier Trust.

The bus features seafront images such as an ice cream sunglasses, seagull, deckchair, beach huts, fish and chips and Brighton rock, and carries his name on the front.

Andy’s wife Carole Durr, who unveiled the name plaque, said: “I’m so happy Andy is being recognised in this way, and his legacy will live on.

“He would have loved the idea of his name being on a bus dedicated to the seafront – and he’d have been the first to get on it and go down to the beach!” 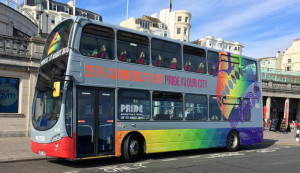 Phil Starr performed on stages across the world for more than 50 years and also raised thousands of pounds for charity. He was also one of the main supporters of the annual Pride event in Brighton and Hove.

Paul Kemp, director of Brighton Pride said: “We are thrilled that Brighton and Hove Buses have joined other prominent city businesses to support Pride in our city in this our 25th Anniversary year.

“This is just the start of an ongoing relationship that includes a dedicated bus and shuttle service from the Pride campsite as well as exciting all year round promotional activity with the Pride bus.”

The Beach Bus is the second in the Get Bus(y) series of Brighton-artist-designed buses that celebrate the city’s unique appeal, and the way buses help people to enjoy life here to the full.

Nick Hill, Brighton and Hove Bus Company’s head of commercial said: “Our buses play their part in helping people to have fun-filled days out – and we wanted to reflect that with a light-hearted tribute to the city’s famous beach.

“We’re sure it’ll make heads turn and bring a smile to people’s faces.  And we’re delighted that the Durr family have given us permission to dedicate it to Andy, with his passion for the seafront and his love of fun.  I can’t think of a more fitting person to have his name on this bus.”

He added: “We are proud to promote diversity in this vibrant, wonderful city and are delighted to help celebrate 25 years of Pride in such a colourful way.”