A former branch of Barclays bank taken over by squatters who wanted to turn it into an anti-austerity “radical bank” is now being transformed into a pop-up community centre. 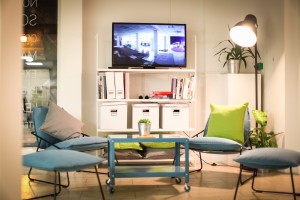 The bank on Preston Road was briefly taken over in June by a group calling themselves the Radical Bank of Brighton and Hove – but they were turfed out after less than two weeks.

But Barclays is instead offering the unused building to the charity 3Space, which is now preparing to open it as a free space for social entrepreneurs, local start-ups and community groups.

Will Dixon, Barclays Community leader for Brighton said: “One of the challenges facing fledgling enterprises today is finding affordable space in which they can experiment with ideas and foster creativity.

“Working with 3Space allows us to tackle this, providing a base for local entrepreneurs and social enterprises and giving them access to the support and resources they need, beyond traditional banking products and services. With the natural entrepreneurial flair of the people of Brighton I’m confident that this resource will flourish.” 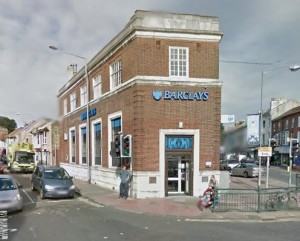 Andrew Cribb, CEO and Co-Founder, 3Space said: “Through our experience in transforming otherwise empty buildings across the UK we have identified a need for a type of local space where creatives, social enterprise, non-profits and local entrepreneurs can work, collaborate and experiment, creating value from an otherwise under-utilised resource, whilst also providing the foundation for sustainable local economic development.”

The charity says the set-up of the spaces will be flexible to encourage experimentation and innovation, and will provide a range of useful tools and equipment.

Further free of charge support will also be provided by Barclays staff such as social media training and access to Barclays personnel to help mentor and support their business growth. Barclays Digital Eagles, specially trained members of staff that provide free technology advice, will also be on hand to help.

The former Barclays branch in Preston Road Brighton will be the second Hatch site to open in the pilot project after Hatch Oxford opened its doors in 2014.

To register an interest, email info@3space.org.

Barclays to close third bank branch in Brighton and Hove