Roads flood as storm hits Brighton – with more on the way

Heavy rain storms which have started moving over Brighton bring a “significant risk” of flooding over the next two days, the Met Office has warned. 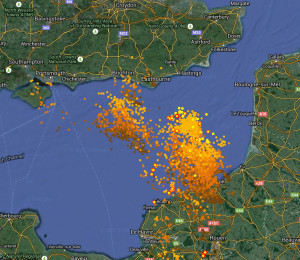 A severe weather warning is in place all through today, with another issued for tomorrow, both for heavy rain.Screengrab of storm at 10.30am from lightningmaps.org

Thunder and lightning started this morning shortly after 10am, and at 1pm, the Met Office upgraded its severe weather warning from yellow to amber as more storms are expected this afternoon.

Roads have been submerged by surface flooding, leading to manhole covers coming up in parts of Brighton, the Sussex Road Police Unit warned.

At midday, the fire service has been called to seven flooding related incidents in Brighton and Hove, as well as two dangerous structures.

And the appalling driving conditions are leading to delays on roads – although the railways appear to be holding up so far.

The Met Office’s amber warning says: “After very heavy downpours this morning, a second cluster of torrential, thundery downpours is expected to move north across the area from late afternoon. The public should be prepared for the risk of flooding of roads and properties.”

But the storm is likely to ease off through Friday: “An area of locally heavy rain already affecting much of England and Wales as well as parts of Scotland at the start of Friday lingers across these areas through the early hours of Friday and Friday morning. Rain is likely to be both persistent and heavy at times.

“Also a risk of thunder, most likely over parts of England and Wales. This rain will tend to ease through the day, probably becoming confined to eastern UK by the end of Friday.”

The Met’s chief forecaster said: “An area of low pressure developing over Biscay pushes into southern UK during early Thursday before tracking further northwards to be centred near or just east of Scotland by Friday afternoon.

“With very warm air being entrained into the system, locally heavy and thundery rain is expected to develop and affect parts of England and Wales during Thursday. 20 or 30 mm of rain may fall in a relatively short space of time in some places whilst locally in excess of 50 mm is possible in just a few hours.

“The development of this system is relatively complex therefore the exact locations of the heaviest rainfall remain uncertain. Further updates to this warning may occur during the early hours of Thursday or Thursday morning when the location of where heaviest rain is most likely becomes more apparent.”

Let us know of any flooding by emailing brightonandhovenews@gmail.com. You can also send us any storm pictures you’d like us to publish, on the same email address or via Twitter or Facebook.