Hundreds of NHS staff from Brighton and Hove took part in a march and rally in central London today (Saturday 17 October).

They were protesting about changes to the contract for junior doctors which they say will mean longer hours and less pay.

Health Secretary Jeremy Hunt accused the British Medical Association (BMA) of misleading doctors and the public about the effects of the new contract.

But doctors, in turn, have said that it is Mr Hunt who is misleading people. 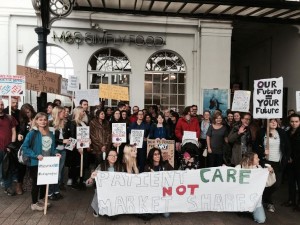 Danny McLernon-Billows, a junior accident and emergency (A&E) doctor from Brighton, said: “On (Tuesday) 13 October, Jeremy Hunt yet again told the Commons that his plans to cut junior doctors’ pay by up to 40 per cent were necessary to implement a ‘seven-day NHS’.

“He claimed this will tackle the ‘11,000 excess deaths’ from emergency admissions at the weekend, caused by under-staffing.

“There are several glaring errors here. First, seven-day emergency NHS care already exists. Every single patient is seen by a doctor within four hours and a consultant within 24 hours.

“Third, increasing non-urgent weekend services will do absolutely nothing to reduce avoidable deaths from emergency admissions.

“Fourth, we spend less on health than almost every other western country. The NHS is facing the biggest funding and recruitment crisis for a generation.” 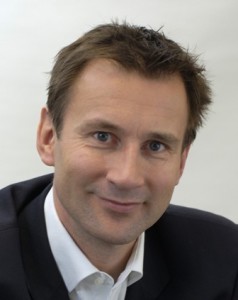 “Paying doctors less for anti-social rotas will worsen the recruitment crisis in exactly the areas we need them – emergency care and general practice.

“Finally, Mr Hunt’s ‘11,000 excess weekend deaths’ figure was taken from a paper by Professor Bruce Keogh, in which he explicitly states ‘it is not possible to ascertain the extent to which these deaths are avoidable’. To assume so would be ‘misleading’.

“Jeremy Hunt is deliberately misleading the public. Out of fear, patients have delayed going to A&E until after the weekend, with dire consequences. One person has already been left paralysed.

“Mr Hunt needs to be held to the same professional standards.” 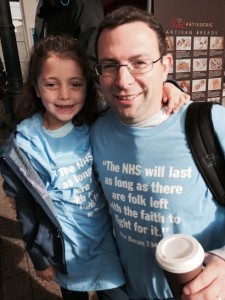 Before the protesters set off by train for London, Rob Galloway, an A&E consultant from Brighton, said: “The NHS winter crisis is now all year round.”

Dr Galloway was one of the speakers at the rally today.

Earlier this week he accused Mr Hunt of being the best recruitment consultant – for the Australian health service.

Dr Galloway, who teaches at the Brighton and Sussex Medical School, said that he hoped that those who were due to graduate next year would want to work in the NHS.

His concern reflects the growing number of local doctors who have moved abroad to countries such as Australia, New Zealand and Qatar. The Qataris are due to hold another recruitment round shortly.

A leaflet from Sussex Defend the NHS said: “Who are junior doctors? Most doctors work for at least 10 years as ‘juniors’ after qualifying.

“Why are they balloting for strike action? Junior doctors are angry because Jeremy Hunt is trying to force a new contract on them.

“He tore up the agreement made with the BMA (the main doctors’ union) last year.

“What is wrong with the new contract?