A man was rescued from a fire at a sheltered housing block in Goldsmid Road on Sunday. 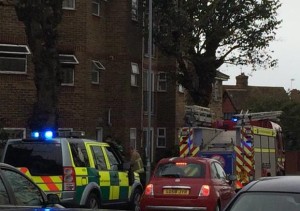 Four fire engines from Hove and Preston Circus and one officer were sent to the incident on at 11.28am on 15 November.

Crew used breathing apparatus and two hose reels to extinguish the fire, which had started in a first floor flat.

A positive pressure fan was used to ventilate the area.

One male casualty was treated for smoke inhalation and left in the care of South East Coast Ambulance Service.

A fire investigation has taken place and the cause of the fire has been confirmed as accidental.

A spokeswoman for South East Coast Ambulance Service said: “SECAmb was called at 11.31am yesterday morning to a fire in a flat in Goldsmid Road  with reportedly one person still inside the building.

“We dispatched a number of vehicles to deal with any casualties, four in total, all suffering from a degree of smoke inhalation.   However, following initial assessment by the paramedics none of the patients were hospitalised.”