Two student houses in the road where a neighbour was assaulted last week for complaining about the noise have been warned not to have any more parties by Sussex University. 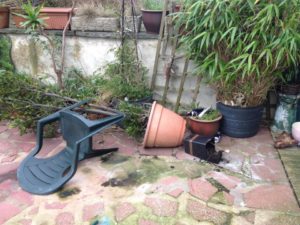 Brighton father Ben Hooley, 42, was punched and headbutted on Tuesday night when he went out to confront a gang of young men shouting in Brading Road who had left a party in the house opposite.

Earlier in the evening, garden furniture and beer cans had been thrown at next door neighbours, who were told they had no right to complain as they were living in a student area.

Sussex Police issued an appeal for witnesses to the assault, and Sussex University has now spoken to students in the house where the party was held – and another where similar verbal abuse was hurled at residents in October – warning them not to hold any more parties.

Yvonne Doyle, who was struck by a full beer can last Tuesday night, said last weekend was bliss as she and her daughter Toxi had been able to get a full night’s sleep for the first time in months.

She said: “It’s been fantastic, so quiet. Obviously there’s been the normal students up and down the road, but as far as next door goes, you can hear a pin drop.

“They also put a card from them through our letterbox this morning, which said, ‘Dear neighbour, we would like to formally apologise for the disruption cased last week.’

“Another house was meant to have a party on Monday 21 December but I think it’s been cancelled. The poor people next door to them, who have young children, had actually booked a hotel which is horrendous they have to do that.”

Ward councillor Emma Daniel said: “This year has been an absolute misery for that street. I have spoken to some of the residents affected and to officers at the university. I am satisfied for now that the police are properly investigating the assault.

“In relation to the most recent incident – landlord/parents and the university have or are holding meetings with the household, the tenants of which appear not to have themselves been involved with the criminal behaviour and who have been cooperative with neighbours and agencies in helping to make this right.

“I am impressed with the neighbour who had visited the tenants and left them on good terms and he felt they were genuinely sorry for what happened. My understanding is that they intend to personally apologise for the upset caused. The university will warn them not to have any more parties.

“I have asked that the university consider a leaflet drop in that street to update residents and give a clear contact for any future issues.

“When I follow up next week I will try to sort a meeting with the staff involved to improve the speed and effectiveness that we all work together to nip these issues in the bud much more quickly.”

A university spokeswoman said: “We are currently investigating a serious complaint involving a party held by University of Sussex students in Brighton.

“When we receive complaints about the behaviour of our students in the community, we take immediate action to find out the facts and to take any necessary steps. This may involve speaking directly with the students and their neighbours to find a way to resolve matters.

“In cases where our students have caused a nuisance, we encourage them in the first instance to apologise to their neighbours and to give reassurance that they will not cause further problems.

“We are strongly committed to resolving any neighbourhood issues that may involve University of Sussex students, and welcome feedback from communities.”

A spokeswoman for Sussex Police said no arrests had yet been made in connection to last week’s assault, but that enquiries continue.

The suspect is described as early 20s, around 5ft 11in, stocky with blonde hair with a quiff and a parker style jacket. Anyone with information should email 101@sussex.pnn.police.uk quoting serial 8 of 2/12.