The i360’s new branding, replacing Brighton with British Airways, was revealed with great fanfare last week – but the new name has divided opinion. 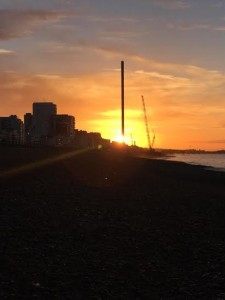 The Brighton i360 pictured by Chris Girvan

The sponsorship deal has been hailed as proof the attraction is capable of drawing big names to Brighton, and with it tourists and revenue to pay back the £36m loan brokered by Brighton and Hove City Council.

But others are disappointed that Brighton has been dropped from the name – and others that the viewing tower, which is now closely linked in the public eye to the Green administration which approved the loan, is now sponsored by a less than environmentally friendly business.

Tom Druitt, Green spokesperson for economic development and culture said while it was great to see the tower nearing completion, British Airways was a disappointing choice of sponsorship partner.

He said: “We had hoped that the opportunity to secure corporate sponsorship would allow us to work with business interests who were committed to an alternative, more environmentally sustainable future.

“Unfortunately we’ve missed that chance and have instead partnered up with a major player in one of the biggest polluting industries in the world. British Airways was recently rated worst out of all the transatlantic airlines in regards to fuel efficiency. Hardly a model partner.

“We wish to see the i360 prosper, and hopefully as a new business partner in the city, British Airways will play a major supporting role in boosting tourism.

“In return we hope that BA will learn from the highly innovative and socially conscious culture of Brighton and Hove and recognise the huge role it has to play in addressing climate change.”

The dropping of Brighton from the i360’s name has also disappointed. One resident said on Twitter: “I have always viewed i360 positively, but find that now it is the British Airways i360 I am a bit hostile. It has become less “Brighton”

“Is Brighton selling air travel, or the other way around?”

And another said: “Isn’t the i360 part owned by Brighton? Stinks of corporate hijack of our city heritage.

“Our city offers so much more than the flight operator, and should not be for sale. If anything, Brighton raises BA’s profile.

“It is unfair to the people of Brighton when you dropped the name of the city that granted and enabled your existence.”

The i360 team responded by saying: “We believe this is fantastic for Brighton. The deal will help bring in more tourists and build our profile on the international stage.

“British Airways can help grow tourism to Brighton and raise its international profile.”

Meanwhile, resident’s suspicions that the tower is leaning were confirmed last week when engineers told the Argus that it was listing by about 4 inches towards Regency Square.

i360 chief executive Eleanor Harris had told those questioning the apparent lean that it was an optical illusion, and the tower was not a single millimetre out.

Last week, she said: “In engineering of tall towers an invisible 0.0006% difference is considered “straight” (but this difference was news to me).”